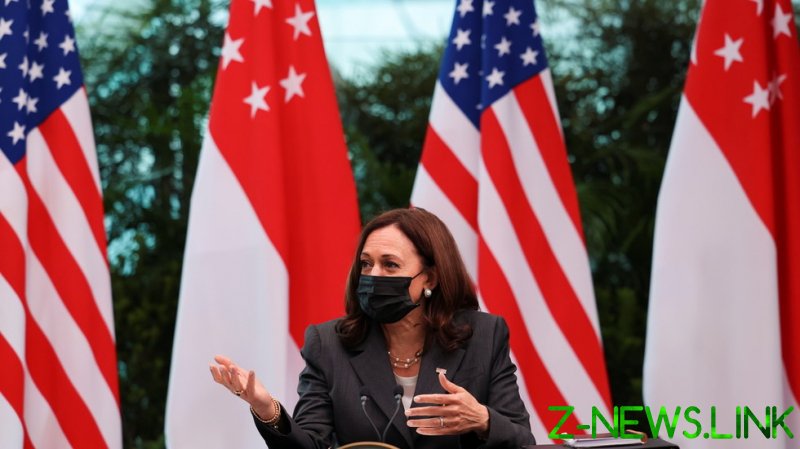 After landing in Singapore for a trip through Southeast Asia this week, Harris outlined the Joe Biden administration’s vision for the region in a speech on Tuesday, saying it seeks to advance “peace and stability, freedom on the seas” and “human rights” in the Indo-Pacific.

Echoing previous comments by Biden, Harris also argued for the need to confront China on a number of issues, saying it “continues to coerce, to intimidate, and to make claims to the vast majority of the South China Sea.”

“These unlawful claims have been rejected by the 2016 arbitral tribunal decision and Beijing’s actions continue to undermine the rules-based order and threaten the sovereignty of nations,” she continued, citing a tribunal court ruling in a case brought against China by the Philippines.

Harris is also set to visit Vietnam later this week, during a trip meant to reiterate Washington’s commitments to regional allies, according to sources close to the VP cited by CNN. The outlet also suggested she would attempt to “embody Biden’s call to pivot US foreign policy focus to counter a rising China.”

While the Chinese Foreign Ministry voiced hopes that Harris’ meetings would promote “peace” and “stability in the region” ahead of her visit, Beijing has yet to respond to the VP’s more hawkish remarks. However, Chinese officials have previously taken a very different stance on the South China Sea, insisting that the presence of the US military in the area is provocative, and that regular American “freedom of navigation” missions threaten their country’s sovereignty.

Beijing has also condemned the US relationship with Taiwan, which it sees as a province of China in rebellion. Building on the efforts of the previous Donald Trump administration, which sold billions of dollars worth of weapons to the island, Biden has embarked on arms sales of his own, the first of which includes a transfer of artillery parts and smart-bomb kits worth $750 million.