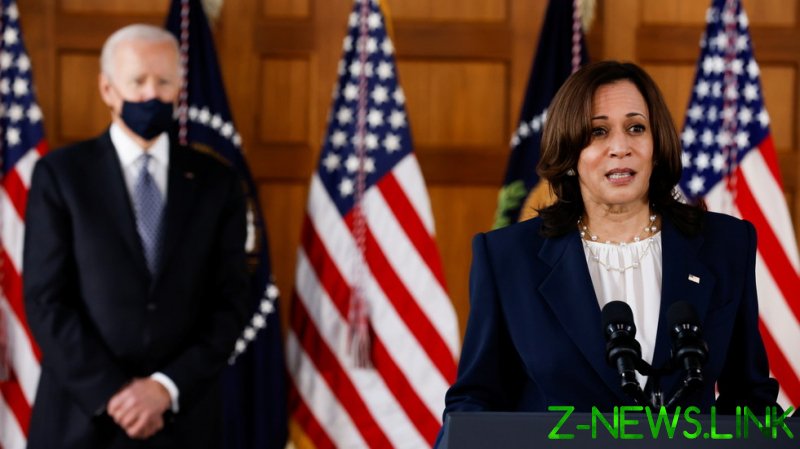 US Vice President Kamala Harris and President Joe Biden visited Atlanta, Georgia on Friday as part of their tour across the nation to promote the economic stimulus package and vaccination campaign successes. However, a spree of gun violence on Tuesday, which left eight people killed, six of them Asian American women, threw a wrench in the pre-planned trip’s schedule.

Speaking after meeting leaders of the Asian American and Pacific Islander (AAPI) community in Georgia, Harris condemned the Tuesday massacre, decrying xenophobia in the US.

For the last year, we’ve had people in positions of incredible power scapegoating Asian Americans. People with the biggest pulpits spreading this kind of hate.

The line of apparent attack against Donald Trump is hardly new. His administration made a policy of blaming China for the Covid-19 pandemic, claiming it covered up the severity of the disease or even caused the outbreak due to an accidental lab leak. Beijing said Washington was simply scapegoating it for its own incompetence in handling the epidemic.

As part of the narrative, Trump and some of his top officials, like Secretary of State Mike Pompeo, insisted on calling the SARS-CoV-2 virus the ‘Chinese virus’ or the ‘Wuhan virus’, after the Chinese city where it was first identified. Critics called it racist, but his administration repeatedly stated that their grudge was against the Chinese government, not the Chinese people.

Vice President Harris, along with President Biden, who spoke next to her during the Atlanta visit, called for national unity against hatred in America. “Hate and violence… is often met with silence… but that has to change. Because our silence is complicity. We cannot be complicit. We have to speak out. We have to act,” Biden said.

The suspect in the Tuesday attacks on spa parlors in Georgia, who is in custody, claimed he targeted the establishments due to “sex addiction,” according to investigators. FBI Director Chris Wray said on Friday that “while the motive remains still under investigation at the moment, it does not appear that the motive was racially motivated.” Both Harris and Biden said the motivation in this particular massacre was irrelevant for their overarching message.

In terms of its political stance, the Biden administration may not be using the term ‘Chinese virus’ (unlike Trump’s team), but its rhetoric towards China doesn’t appear that different.

The latest diplomatic spat happened just this Thursday, when US Secretary of State Tony Blinken used a meeting with Chinese officials in Alaska to lecture them publicly on how Beijing supposedly uses “economic coercion” and erodes the “rules-based order.” His Chinese counterpart, Yang Jiechi, hit back, blasting Washington for imperialist policies and saying it is not in a position to criticize Beijing.