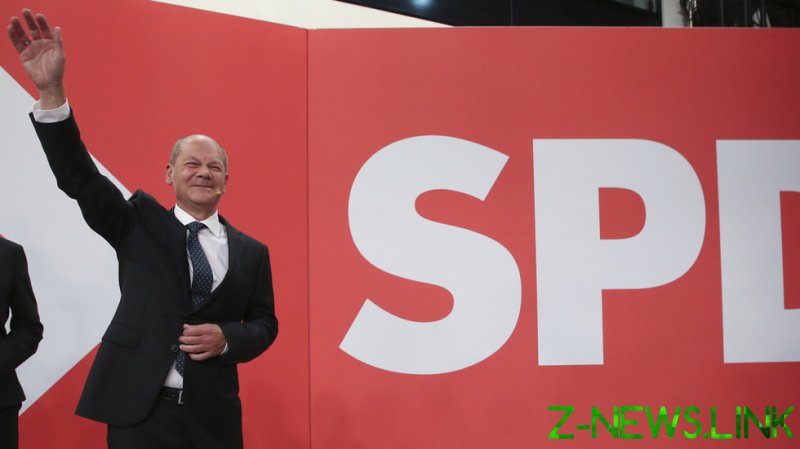 “The voters have very clearly spoken. They said who should form the next government,” Scholz said on Monday.

They strengthened three parties – the Social Democrats, the Greens and FDP [Free Democratic Party]– and therefore that is the clear mandate that the citizens of this country have given. These three should form the next government.

Scholz, the Social Democratic Party’s (SPD) candidate to replace Angela Merkel as chancellor, made his statement after the party came first in Sunday’s vote with 25.7%, while its chief rival, the center-right CDU/CSU (Christian Democratic Union and the Christian Social Union) alliance, showed the worst performance since 1949 with 24.1% of the vote. The parties had governed the country in a coalition before the election.

Scholz added that the CDU/CSU have “received the message from the citizens that they should no longer be in the government, but go into opposition.”

The Social Democrats are vying for the so-called ‘traffic-light’ coalition with the Greens and FDP, whose respective party colors are red, green and yellow. These three parties have benefited the most from the flight of voters out of the CDU, according to an analysis by political research firm Infratest dimap that was cited by the German media.

The Greens and FDP, which enjoy the support of younger voters, came in third (14.8%) and fourth (11.5%) respectively. The Greens’ candidate for chancellor, Annalena Baerbock, said her party’s election gains are a “strong mandate for the Greens to take responsibility for shaping our country.”

Before Sunday’s vote, FDP leader Christian Lindner spoke in favor of the ‘Jamaica’ coalition, or the black-green-yellow alliance, between CDU/CSU, FDP and the Greens, where black symbolizes the CDU/CSU. The bloc’s name comes from the colors of Jamaica’s flag.