Home / sports / Vorskla in the match with Desna bounced back with 0:3

Vorskla in the match with Desna bounced back with 0:3 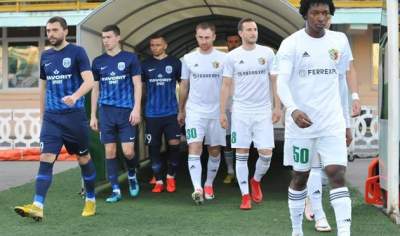 “Vorskla” in the 25th round of the Premier League made one of the finest comebacks in the history of Ukrainian football.

While “Vorskla” was trying to get into the game “Desna” quickly scored two goals, both goals scored by former players of the Poltava serhiychuk sold out one on one with the Keeper, and Khlyobas finished a ball after blow of Bogdanov’s free kick and save by the goalkeeper. In the 29th minute Tkachenko parried a penalty kick from Artem Favorov, but before the half time whistle the ball the third time was at the gate “Vorskla” – serhiychuk went on strike position, cut inside and shot accurately into the far bottom corner.

It seemed that in this match “Vorskla” not to escape, but in the second half came on the pitch a completely different team. Poltava started the attacked gate “the Gums” and soon began their impressive comeback. Gabelok has reduced backlog in the account, then Sharpar penalty for playing Partsvania hand, and 71 minutes, the Brazilian Careca after a corner was punished Pasta for an unsuccessful game at the exit.

Despite the loss of the victory over Vorskla “Desna” retained the status of favorite lower top 6. Club from Chernigov ahead of nearest rival by 5 points.

In the 26th round of “Vorskla” in Odessa will play against “Chernomorets” and “Desna” will play an away game with Arsenal Kyiv.