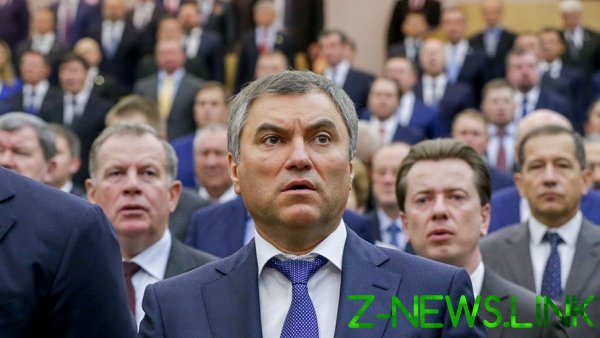 The Chairman of the State Duma of Russia Vyacheslav Volodin on Sunday said that the United States seeks to destabilize the situation in Russia and ultimately “divide” it. Instruments that he called “stuffing of misinformation on the situation of the coronavirus” and “power ratings in Russia”, and the goal of maintaining “dominant position” of the US in the world.

“Attacks by the United States aimed solely at discrediting the President, the key institutions of government, senior politicians, to undermine confidence and weaken them,” – quoted Volodin on the website of the state Duma.

“Their goal is to make the country weaker, and then dismember – this is the plan they have, and they haven’t abandoned it. To do this, at the head of our state they need a obedient policy that would be guided by their interests, not the interests of our citizens”, – said Volodin. He – like many times in the past – made a praise in the address of President Vladimir Putin, saying he is “advantage” of Russia, the credibility of which seek to undermine the CIA and the state Department. According to Volodina, the United States supports “constant contact” with a number of opposition politicians, media and bloggers who may not even realize “that they are in the structure of pawns”.

Statements Volodin was made on the background of harsh statements of the Russian foreign Ministry on publications in the American and British press on the epidemic of coronavirus infection in Russia. In particular, the foreign Ministry demanded rebuttal from publications Financial Times, the New York Times and Bloomberg in connection with their articles about the peculiarities of accounting of deaths from COVID-19 in Russia. The Russian doctors and officials have confirmed that the official statistics made death not all patients diagnosed with the coronavirus, but only those cases where COVID-19 named as the main cause of death.