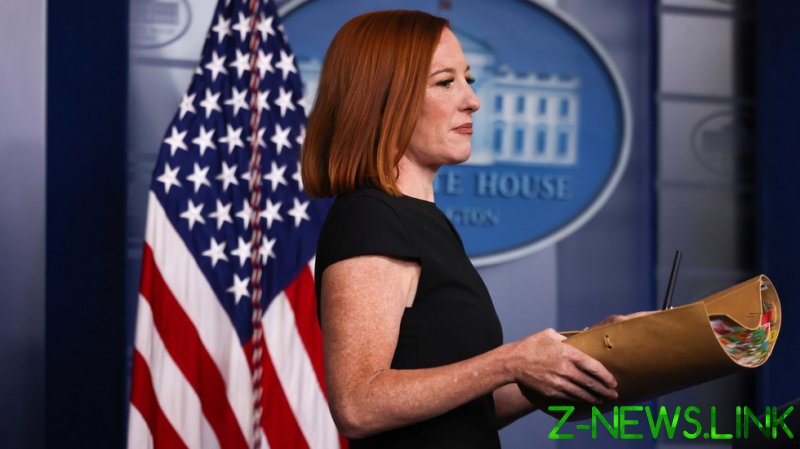 There has been no shortage of adoration poured on President Biden and members of his administration by the sympathetic US mainstream media. One of the most recent examples of the genre is its gushing ode to Psaki, published this week.

Unlike those who held the position during the Trump era, the article suggests, Psaki has “a mixture of warmth, humor, intelligence, and edge.” She has an army of loyal fans on social media, praising her “unflappable” demeanor and celebrating her ‘Psaki bombs’ – the moments when she dunks on conservative media. Some veterans in the press corps admit that her “briefings are not exceptionally informative,” but that this trend started before her time.

Psaki is apparently relatable and does not endorse the attitude of superiority towards journalists that some officials during the Obama presidency had. She also puts her makeup on herself, even though the White House has a person on the payroll to do the job. However, she is a no-nonsense spokesperson and hates being called ‘nice’ because “the word is sexist and a little diminishing,” the article says.

Apparently, RT should take a tiny bit of credit for making Psaki the amazing woman she seems to be now, since it gave her some “character-building experience,” according to Vogue. In 2014, the channel “launched a campaign to cast her as an airhead,” with a collection of gaffes and funny moments that Psaki had with journalists during her tenure as the spokesperson for John Kerry’s State Department.

“There were T-shirts printed with Psaki’s face, and conspiracy theories about a rumored pregnancy,” the magazine added, without elaborating on what role RT supposedly played in selling such merchandise or spreading such theories. A joke that Psaki wouldn’t be able to give a straight response if asked about whether she was expecting a baby was aired on Russian-language TV in 2015, but the host who made it, Dmitry Kiselyov, was working for another, domestic, channel.

For some reason, Vogue didn’t bother to tell readers what RT’s ‘Psaki moments’ were about, or even add a link to it. It’s probably for the best, else its readers might watch them and find them less impactful than the magazine makes them seem. Some are simple gaffes, like Psaki getting confused about who was the seller and who was the buyer in Russia’s natural gas trade with Europe.

As for Psaki’s shutting down of uncomfortable lines of questioning during briefings, examples of which were also included on the list, it is part of her job. Vogue praised her for using “cheerful quips” to do exactly that when speaking on behalf of the White House. The only difference now is that she cannot do it to RT journalists, whose access to the American seat of government was stripped under President Trump, with absolutely no objections from the US mainstream media.

The White House press secretary has a difficult job. It may be tricky to explain to the American public that Big Tech should act in unison and in coordination with the Biden administration to ban people for spreading “misinformation” from all major platforms at once – some would think it goes against the First Amendment.

Also, there are the artistic efforts of the president’s son, which, contrary to all appearances are not just Hunter Biden’s latest attempt to cash in on his family name.

Kudos to Jen Psaki for being good at what she does – with a little help from the gushing media.