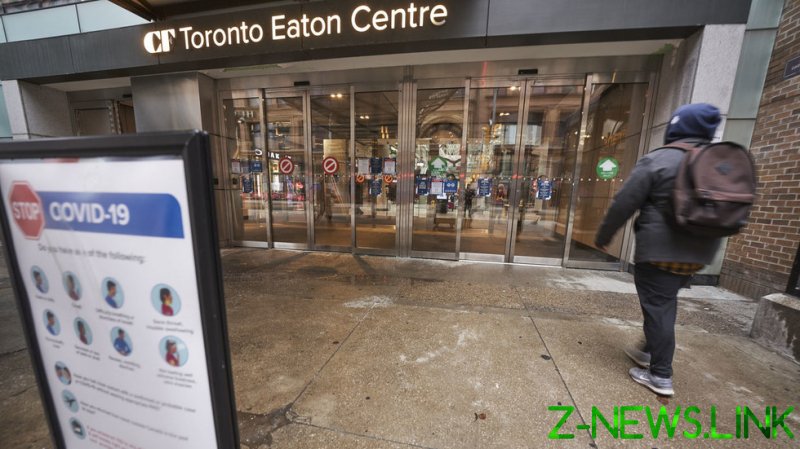 Since being told one year ago that the curve-flattening would be a two-week process, many Canadian small- and medium-sized businesses have instead been forced to close for much of the year (while big-box superstores have remained open).

Dan Kelly, the president and CEO of the Canadian Federation of Independent Business, recently tweeted against the enforced closures, asking Ontario Premier Doug Ford for “a new plan.”

In a separate tweet, Ford, pretending that his policies hadn’t destroyed businesses and impoverished the working class, wrote of firing up the economy, creating more jobs, and getting people back on their feet.

Tell that to the small businesses barely operating, or those unlikely to ever reopen again.

But the lockdowns haven’t only affected businesses and incomes, they have a caused a host of other grave consequences: people, especially the elderly, feeling deeply and profoundly isolated; an increase in drug overdoses, domestic abuse and suicides; and major delays in surgeries and treatments of chronic and other diseases, leaving the afflicted suffering.

Canadians have been prevented from seeing loved ones, especially over holidays (although a long list of politicians and officials have overstepped “the rules” to do so themselves), and in recent months those daring to travel abroad have been subjected to quarantine in hotels, at their own very hefty expense.

And now, in Ontario, a new round of lockdowns has been instituted, even though cases of the virus are extremely low: As of March 16, there were just 761 people in hospital with the disease and 292 of them in intensive care, out of a population of 14.5 million people.

More and more Canadians are fed up with the restrictions, and are questioning the science and logic behind them, especially given that on many occasions, various Canadians in positions of power have violated the very measures they endorsed.

Pushing Back Against Needless Measures

Some Canadians, armed with knowledge of the Charter of Rights and Freedoms, aren’t complying with the draconian and absurd measures, and instead are walking out of airports instead of being incarcerated in quarantine hotels.

In March, nurse Jessica Faraone made headlines for doing just that and walking out of Toronto’s Pearson airport instead of subjecting herself to a costly $2,000-plus quarantine hotel stay.

In a later interview, Faraone said a border guard had attempted to intimidate and shut her up, but she knew her rights. She added: “I have worked in the hospitals and more than ever I’m seeing suicide, depression, strokes, heart attacks, addiction issues. Masking people and children, oppressing health-care workers’ opinions that go against the grain, socially isolating people, and instilling fear into Canadians… is not how we solve this problem.”

And it’s not just well-informed individuals who are contesting the drastic measures.

The Justice Centre for Constitutional Freedoms has been active in challenging the government both on quarantine hotels and on tickets issued to citizens for alleged violations of public health orders. The centre is also disseminating resources for Canadians to know their rights regarding Covid measures.

Liberty Coalition Canada was formed after Covid restrictions were brought in. The coalition is a “national network of clergymen, elected officials, small business owners, legal experts and other concerned citizens” that now has a number of sub-groups addressing specific aspects of the measures Canada has taken.

These include the social media campaign Save Our Youth, Reopen Ontario Churches, and the End the Lockdowns Caucus. The latter comprises a number of current and former elected representatives who came together in February “resolved to ensure there is open, honest, and public debate regarding the Covid government response.”

This body espouses what many ordinary Canadians have been feeling: “After careful examination and scrutiny of mitigation measures undertaken by all levels of government, it is now evident that the lockdowns cause more harm than the virus and must be brought to an end.”

Likewise, the newly-formed Professionals Against Lockdowns – already listing over 100 professionals, including doctors, nurses, healthcare professionals, legal experts, police and teachers – aims to provide “evidence-based, scientific research that will educate and empower the public.”

Noting the widespread censorship of any dissenting voices on issues Covid, its statement reads: “It is our professional duty to protect the public, our communities, and our children. We will advocate for what is right and speak up against harm. Together, we will continue to be the voice for the voiceless to ensure that the truth about these lockdowns is heard.

“The government’s response has lacked a risk variant analysis on all our populations. We are seeing the harm being done first-hand. We know lockdowns, isolation of healthy individuals, and the violation of our rights are causing more harm than good.”

And likewise, noting that Canada’s policies are not based on solid science, the recently formed Canadian Doctors Speaking Out stated: “The current government measures regarding COVID are not supported by evidence-based medical research and many of these measures are harmful to individuals, families and society in general.”

The alliance calls on the government to stop promoting not only lockdowns, mask-wearing and physical distancing, but still more supposedly necessary Covid measures, including cleaning surfaces with toxic disinfectants and the quarantining of asymptomatic people.

And they also say (another statement I would wager many Canadians would agree with): “Our goal is to halt the misuse of power by politicized public health ‘experts’ currently being conveyed through damaging Covid-19 public health policies that are destroying Canadian society and the health of Canadians.”

We are told to follow the science (and not question it), but as more people ask exactly what science it is that we’re following, it is encouraging to see these coalitions of doctors and other experts together addressing the absurdities and dangers of lockdowns and related Covid measures.

Their combined knowledge is based on science, and I’m much more comfortable following their advice, rather than that which has ruined lives over the past year, and promises to damage more.

What of the science of Toronto’s Medical Officer of Health? Might her husband’s vested financial interests in Pfizer and AstraZeneca impact some of her decisions?

And there’s the idiotic advice of Canada’s Chief Public Health Officer, Theresa Tam, who suggested wearing a mask while having sex.

Or the Albertan Covid vaccine task force buffoon, who clearly wasn’t accustomed to wearing the mask his task force promotes (a must-see performance!).

Meanwhile, professionals with science-based opinions that counter the hoops Canadians have had to jump through have been ostracized by the mainstream media (CBC cut off one such professional, Dr. Joel Kettner, in mid-sentence), censored by social media platforms, and essentially rendered invisible to Canadians, denying the public the possibility of hearing anyone’s professional thoughts on Covid other than the government’s.

To those in Canada who have felt isolated and helpless, you’re not alone, and now you have access to legal resources to fight the government’s unnecessary and truly dangerous policies.