Vitali Klitschko and Lewis in a rematch to play chess 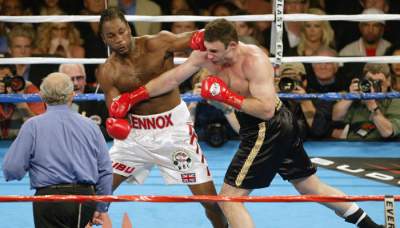 Two former world champion in the heavyweight Vitali Klitschko and Lennox Lewis decided on the format of the exhibition rematch in Kiev.

Second Klitschko and Lewis will be held in October 2018 within the framework of the 56th Congress of the world Boxing Council (WBC) in Kiev.

“Men’s conversation to the two gentlemen with gestures” were a game of chess. About that Lewis said in comments to the British newspaper “Daily Mail”.

“We play a chess match in the Boxing ring. We too old now to put on the Boxing gloves. We will be more interesting to fight in the sharpness of mind than with fists,” said Lewis.

See also:  Federer for the fifth time won the masters in Indian wells

Klitschko and Lewis first met on 21 June 2003 in Los Angeles in the battle for the British owned the WBC and IBO. One of the most exciting fights of the 10th anniversary ended with the defeat of the Ukrainian technical knockout – defeating Lewis at the judges ‘ notes, Vitali Klitschko could not continue the fight due to severe cuts.

Lewis promised Klichko-senior revenge, but the problems with which the British champion has faced in the ring, pushed him to retirement.

At the 56th Congress of the WBC in Kiev expected the elite world of professional Boxing. The organization’s President Mauricio Sulaiman has confirmed the arrival in the capital of Ukraine legendary Champions Mike Tyson and Evander Holyfield, is expected arrival of Riddick Bowe, Julio Cesar Chavez and other iconic boxers of today and the recent past.