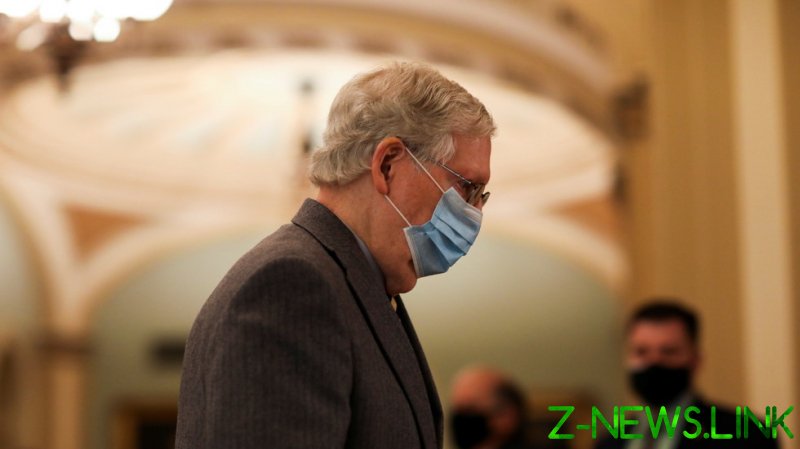 Robinson tweeted on Thursday that he had made a “bad joke” and that “no one should be assaulted.” The apology came a day after he had asked, in a since-deleted tweet, “Who are Mitch McConnell’s neighbors? I’m just saying Rand Paul’s neighbor did what a true Kentucky hero should do. It’s your turn to step up.”

Paul, who, like McConnell, is a Republican, is Kentucky’s other Senator. In 2017, he was tackled to the ground by a neighbor in a dispute over the disposal of garden refuse, sustaining six broken ribs and requiring the removal of part of his lung. Three years on, Paul said he hadn’t had a day or night without pain since the attack and had suffered several bouts of pneumonia, leading to hernia surgery caused by incessant coughing.

Paul’s wife, Kelley, was aghast at Robinson’s tweet calling for McConnell to suffer the same fate. “I am so disgusted by this, I have no words,” she said. “The 2019 National Teacher of the Year is celebrating the violent assault on my husband … This hateful thug is calling for more violence on Senator McConnell.”

Kelley Paul tagged Twitter chief Jack Dorsey in her tweet, but the social media company took no action against Robinson, who deleted his message himself. Twitter has previously suspended accounts, such as that of radio host Alex Jones, for allegedly inciting violence.

Robinson’s Twitter messages were hidden from everyone other than his approved followers, as of Thursday afternoon. The teacher, who is black, initially blamed the backlash over his McConnell tweet on “conservative bots” and said no one had complained “until I promoted black medical awareness.”

Facing mounting pushback over his comment, Robinson said he hadn’t been aware Rand Paul had been seriously injured, and referred to the unprovoked assault from behind as a “fight.”

“I was 100% wrong for the Rand Paul/Mitch McConnell joke and once again apologize for my actions. I own this mistake and hopefully my record proves this an anomaly to what I represent,” he said.

Robinson, who taught history to students inside the Richmond Juvenile Detention Center, was named National Teacher of the Year by the Council of Chief State School Officers. While his call to attack the Senate leader made waves online, it is unlikely to cost him his job. Richmond Public Schools Superintendent Jason Kamras thanked Robinson via Twitter for his “heartfelt apology” and added, “Words matter – across the political spectrum.”

However, some observers argued that the apology did not go far enough, and that Robinson was unfit to educate young people. One commenter asked, “So the cancel culture only applies when it’s directed at someone on the right?”