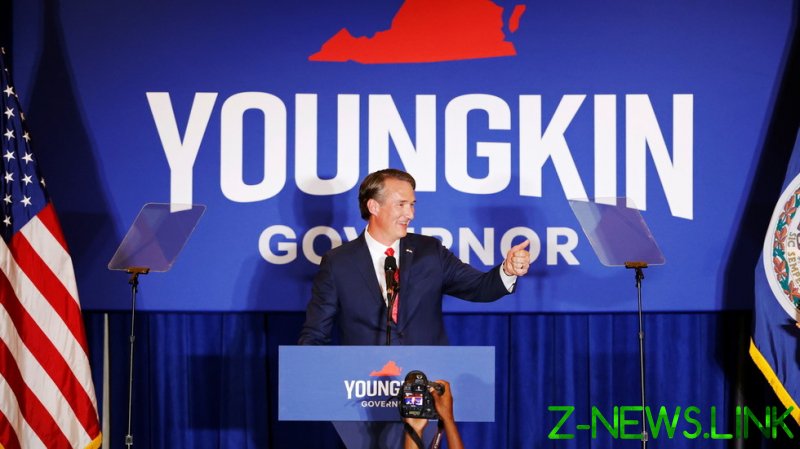 The Republicans have registered a shock victory in Virginia, where Christian businessman Glenn Youngkin has won the race to become the commonwealth’s new governor.

At the outset of the campaign, few political pundits gave Youngkin any chance of winning, as Virginia is traditionally a Democrat state, with Joe Biden defeating Donald Trump there last year by 10 percentage points. Moreover, Youngkin’s opponent, Terry McAuliffe, was himself a former occupant of the governor’s mansion. In the event, Youngkin took nearly 51% of the vote to McAuliffe’s 49%.

The main issue during the campaign was education, and in particular critical race theory (CRT) being taught in schools. Indeed, polls revealed that 25% of Virginians said that it was the top issue and 71% stated that it was “important.” Youngkin therefore sensibly made the issue the focal point of his campaign, and championed the rights of parents to challenge what their children are being taught in schools.

In contrast, McAuliffe, who was once deemed a moderate, seemed dismissive of parents and told them that “I don’t think parents should be telling schools what they should teach.” Of course, this went down like a lead balloon with parents, and from that moment McAuliffe’s poll ratings began to slide and Youngkin’s started to rise. Indeed, it could be argued that it was McAuliffe’s arrogance that invited Youngkin into the race.

Once McAuliffe realised that he was bleeding support, he played the age-old Democrat trick of accusing his opponent of stoking racism. For example, when Youngkin argued that it was a parent’s right to object to the teaching of CRT, McAuliffe said, “I really hate to see [that] what Glenn Youngkin is trying to do to Virginia [is] what Donald Trump did to our country.”

Yet although McAuliffe claimed that he was determined to keep the issue of race out of the election, on the eve of the poll, he announced that if re-elected, he would ensure that there were fewer white teachers. He said, “We’ve got to diversify our teacher base here in Virginia… 50% are students of color, and yet 80% of the teachers are white.” He then claimed, “We all know what we have to do in a school to make everybody feel comfortable in school.” The message was clear: in McAuliffe’s view, black children in Virginia do not feel comfortable being taught by white teachers.

And this is why McAuliffe lost this election. He got dragged into a culture war, only to find that Virginians were sick and tired of divisiveness, particularly in their classrooms. The McAuliffe of 10 years ago, who was a moderate focused on the economy, would have won this election. But like many Democrats in recent times, he has metamorphosed into a culture warrior, which may go down well with the hard left and self-loathing metropolitan liberals, but it repulses the majority… as he found to his cost.

Many have viewed the Virginia race as a referendum on Joe Biden. Even on Tuesday, Biden predicted that “I think we’re going to win in Virginia.” He also downplayed his role in the election, stating that “I don’t believe, and I’ve not seen any evidence that, whether or not I am doing well or poorly, whether or not I’ve got my agenda passed or not, is going to have any real impact on winning or losing.”

Biden is, amongst other things, delusional if he believes that he has not played a significant role in McAuliffe’s surprise defeat. His poll ratings have been falling through the floor recently, with 71% of Americans convinced that the country is heading in the wrong direction under his leadership. Moreover, his feted “Build Back Better” agenda is marooned in the Senate, with some of his own moderates refusing to sign off his $1.75 trillion stimulus package. Yesterday’s defeat is as much Biden’s as it is McAuliffe’s.

But this was not the only election taking place in Virginia yesterday. The Republicans also won the elections for lieutenant governor and attorney general, and they are closing in on taking control of the state’s House of Delegates. It is, in effect, a clean sweep in the “Old Commonwealth” for the Republicans and a bloody nose for the Democrats.

And the rejection of wild hard-left Democrat ideas was seen further afield. In Minneapolis, the city in which George Floyd was killed, citizens rejected a proposal to abolish the city’s police department and replace it with a new Department of Public Safety by 56% in a referendum. The proposed Department of Public Safety was backed by Democrat congresswoman and leading “Squad” member Ilhan Omar and a plethora of hard left groups. However, thankfully, common sense prevailed.

Then there is the race for the governorship of New Jersey, which, like Virginia, should have been an easy victory for the Democrats. Instead, at the time of writing, it remains “too close to call.” Regardless of whether the Republicans succeed in winning, the fact that they can run the Democrats close in what is historically a solid blue state only reinforces the view that Biden’s party is increasingly out-of-touch with mainstream America and is clearly losing support.

So, what do Democrats do now? They are faced with two choices: they can either tone down their radical cultural agenda and attempt to win back moderate voters, or they can simply carry on regardless. Unbelievably, it seems that many Democrats prefer the latter, with one commentator blaming “wilfully ignorant white people” for the loss in Virginia. Others simply cannot accept that Virginians voted against CRT, and instead claim the revolt was against school closures and mask mandates. I think it’s called “burying your head in the sand.”

The results yesterday are a clear warning to the Democrats that what is coming next year in the midterms could be a Republican tsunami. Indeed, there is a precedent for this. In 2009, a year after Barack Obama became president, the Republicans won Virginia and the following year they took control of both the House and the Senate in the midterms. It looks like history could be about to repeat itself.

Although Obama went on to win a second term in 2012, it is clear that Biden is no Obama. Some political commentators are suggesting that the Democrats should start looking beyond Biden for an alternative candidate for 2024, or actively groom Kamala Harris for a tilt at the White House. This makes sense, as Biden will be 82 by the next election, and judging by his cognitive decline, it is obvious that he will be a one-term president.

What happened in the US yesterday should be a wake-up call for the Democrats, but I suspect that it won’t. They are too in thrall to the hard-left and too ideologically wedded to the mantra of identity politics to change. As a result, they will try to ignore the fact that the results were a revolt against their aggressive culture war, and plough on as if nothing had happened.

Nevertheless, what happened in Virginia yesterday was a “parents’ revolt” against CRT and the culture wars being fought in classrooms. It was the moment when people of all races stood up and said, “enough is enough.” Indeed, it could be the beginning of the common-sense revolution that the US – and the Western world – so desperately needs.