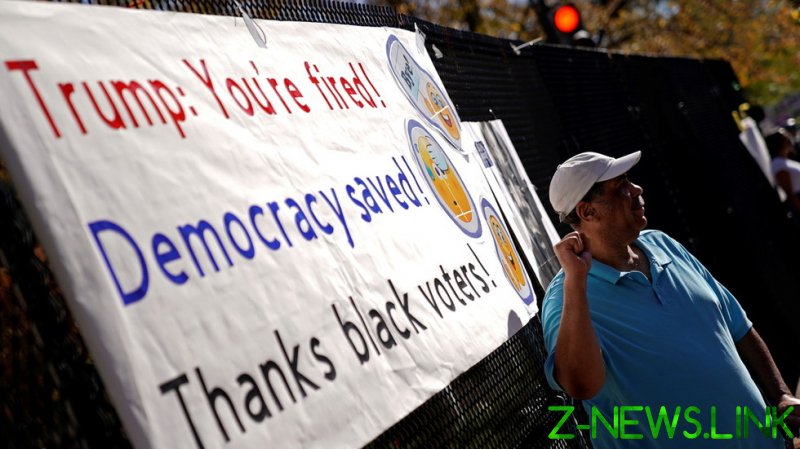 The professor, Brandon Hasbrouck, made his argument in a new op-ed series published by The Nation. Hasbrouck argued that the US political system has given unfair weight to white votes, partly because predominantly white states with relatively few people, such as Wyoming, get two Senators, while largely black cities can only occasionally overcome the mostly white votes from elsewhere in their states. He dismissed the fact that black votes in Atlanta, Detroit, Milwaukee and Philadelphia essentially won Democrat Joe Biden the November 3 presidential election, saying the outcomes in Georgia, Michigan, Wisconsin and Pennsylvania were “worryingly close.”

He graciously suggested that so-called “vote reparations” also should be extended to Native Americans, but his proposal was nevertheless roasted on social media as inherently racist.

“I don’t think advocating for systemic racism would be in the best interest of the country, no,” one commenter tweeted.

Another observer accused Hasbrouckof stirring racial tension, saying: “You race hustlers get paid to recline in your comfortable office chairs and spew out the worst, hottest takes you can stomach just to get a rise out of people. You demean and cheapen the public debate for your own benefit.”

Christopher Shay, senior editor for The Nation, said Hasbrouck’s article is part of an op-ed series in which “writers and thinkers propose an idea that may not be politically realizable in the short term, but that pushes one to think broader about solutions – something to the left of the left of the possible.”

The professor is no stranger to controversial ideas. Washington & Lee touts Hasbrouck, who is black, for doing “groundbreaking work on police abolition.” He also has argued that both Washington and Lee should be dropped from the university’s name because namesakes George Washington and Robert E. Lee both perpetrated “racial terror.”

Hasbrouck argued in an October op-ed in the Richmond Times-Dispatch not only that Democrats must pack the Supreme Court with as many as six additional justices when they retake power, but that the new judges must be “color-conscious” to redress the court’s “chronic anti-blackness.”

The professor’s latest idea may have been even less salable to a broad audience than his earlier arguments. “Thankfully, this is so blatantly unconstitutional that it could never be put into law,” one observer tweeted. “It is also, quite possibly, the worst take of 2020, and that is quite the achievement.”