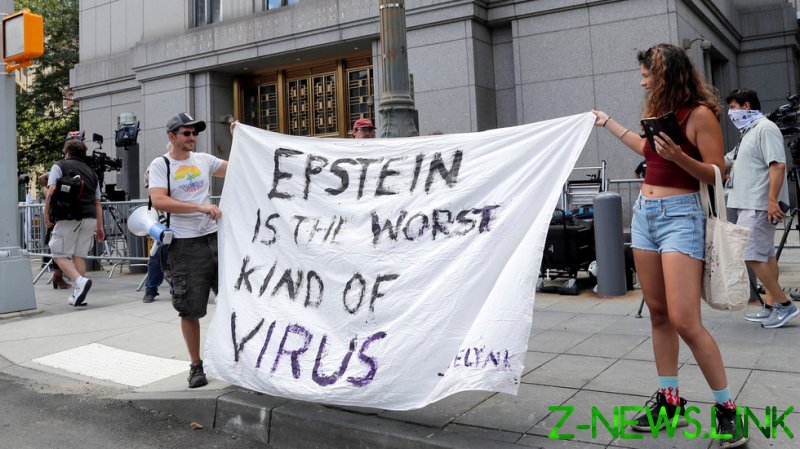 Passenger logs for Epstein’s four helicopters and three planes have been subpoenaed by Virgin Islands AG Denise George, who recently sued the disgraced financier’s estate for 22 counts including human trafficking, child abuse, neglect, prostitution, aggravated rape, and forced labor, according to a Sunday report by the UK Mirror.

In addition to the passenger lists, George has requisitioned “complaints or reports of potentially suspicious conduct” and any “personal notes” the pilots made while flying Epstein’s alleged harem of underage girls around the world. She also wants the names and contact information of anyone who worked for the pilots – or who “integrated with or observed” Epstein and his passengers.

Epstein pilot David Rodgers previously provided a passenger log in 2009 tying dozens of politicians, actors, and other celebrities to the infamous sex offender – including former US President Bill Clinton, actor Kevin Spacey, and model Naomi Campbell. However, lawyers for Epstein’s alleged victims have argued that list did not include flights by Epstein’s chief pilot, Larry Visoski, who allegedly worked for him for over 25 years.

“The records that have been subpoenaed will make the ones Rodgers provided look like a Post-It note,” a source told the Mirror over the weekend, claiming that George’s subpoena had triggered a “panic among many of the rich and famous.”

Epstein’s private plane, nicknamed the Lolita Express, counted among its passengers such luminaries as the UK’s Prince Andrew, celebrity lawyer Alan Dershowitz, actor Chris Tucker, Harvard economist Larry Summers, Hyatt hotel mogul Tom Pritzker, and model agency manager Jean-Luc Brunel along with Campbell, Spacey, and Clinton (who the logs show flew with Epstein over two dozen times). However, the passengers who enjoyed his other aircraft have not been made public – yet.

George has also subpoenaed more than 10 banks – including JPMorgan, Citibank, and Deutsche Bank – in her quest to get to the bottom of the financial edifice Epstein built up before he died. The financial institutions have been ordered to submit documents related to some 30 corporations, trusts, and nonprofit entities tied to the predatory playboy.

Epstein supposedly committed suicide last year in a Manhattan jail facility, while his accused madam Ghislaine Maxwell remains imprisoned in a Brooklyn detention center awaiting trial on charges related to child trafficking and perjury after her arrest earlier this year. Maxwell’s lawyers have struggled to keep documents introduced as part of a recent defamation suit by one of Epstein’s alleged victims under seal, insisting the information would deny her a fair trial.