Viral VIDEO: Veteran state trooper forced out for refusing Covid jab, signs off for last time by telling governor to ‘KISS MY ASS’ 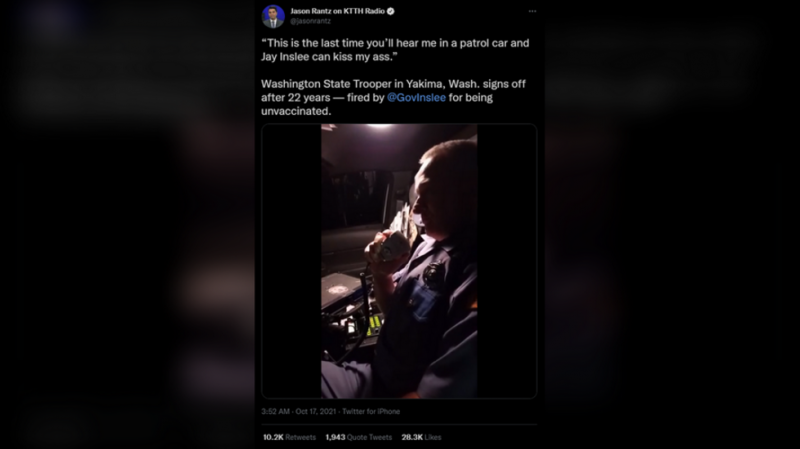 A viral video of the unidentified trooper began circulating on social media on Saturday, showing him signing off to his dispatcher for the last time while sitting in his patrol car. “This is my final signoff, and after 22 years of serving the citizens of the state of Washington, I’ve been asked to leave because I am dirty,” the officer said.

The trooper didn’t specify what he meant by “dirty,” but Seattle radio host Jason Rantz, who has booked an interview with the man, said he had been fired for defying Governor Jay Inslee’s Covid-19 vaccine mandate. Inslee ordered in August that Washington’s state employees and contractors be fully vaccinated by October 18 or face termination. The order marked one of the most stringent such mandates in the nation.

The state trooper recounted some of the difficulties he’s gone through on the job, such as dealing with numerous fatalities and injuries. “I’ve worked sick, I’ve played sick, we’ve buried lots of friends over these years,” he said.

The officer added: “I’d like to thank you guys, I’d like to thank the citizens of Yakima County, as well as my fellow officers within the valley. Without you guys, I wouldn’t have been very successful, and you kept me safe and got me home to my family every night. Thank you for that. I wish I could say more, but this is it.”

But other observers argued that no one should have the right to force people to be inoculated, especially those who acquired natural immunity by surviving Covid-19 infections. “God bless him for not giving in to tyranny,” one commenter tweeted. “Not many men truly stand up for what they believe in anymore.”

Missouri state Representative Bill Owen (R-Springfield) was so impressed by the trooper’s response to Inslee’s mandate that he tried to recruit him to his state. “We would be pleased to have you join our great Highway Patrol,” Owen said. “Life is great in Missouri. If I can help in any way to assist in making this happen, please let me know.”