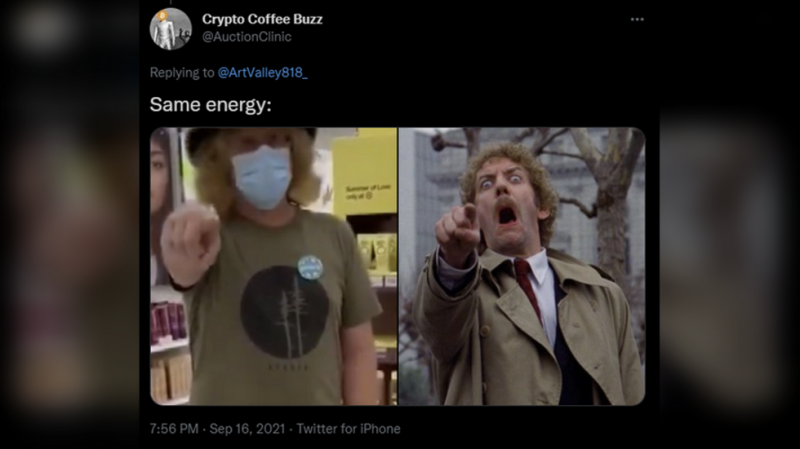 “You’re not going to follow me around in the store and point at me to people,“ the female Target shopper said indignantly as a man sporting a surgical mask and a hat did just that. The video went viral on Twitter on Wednesday after being posted by Art TakingBack, who tweeted that it gathered one million views in just 16 hours.

“It’s a state regulation,” the man insisted, later adding that it was also a rule of the store – but producing no evidence he had the authority to enforce either.

“It’s not a law. You’re an idiot,” the woman shot back, as a fellow shopper leapt to her defense and the man snarled that the dispute was “between the two of us.” Reminding the man that he had his mask and vaccine and was therefore “safe,” however, went nowhere with the would-be stalker, who continued to follow the woman around the store.

“You’re making a bad decision. You’re a bad American … you’re a bad person for doing this,” the man continued to declaim, while the woman sarcastically agreed, adding that she also voted for former president Donald Trump – a statement that elicited cheers from at least one other shopper.

The man repeatedly tried to claim superior medical authority by way of his (absent) wife, who was – he claimed – a specialist in infectious diseases. “Do you think she just doesn’t know what she’s doing?” he insisted on asking those who suggested he was harassing the woman.

Others were more direct with their criticism, warning that he should “watch what happens” if he tried to follow one of their wives around a store pointing and ranting.

What would once have been considered harassment was now being seen by some as acceptable behavior because it was being directed against the new unvaccinated underclass, one tweeter complained, while another agreed, saying Target should have stepped in to prevent the man from verbally tormenting a shopper.

Some took note of the unusually sympathetic strangers. While videos of supermarket ‘Karens’ demanding mask compliance and other Covid-19-related behavioral compliance have proliferated in the last 18 months, onlookers usually stay out of the action – or join in on the side of the Karen.

And more than a few people were reminded of the film ‘Invasion of the Body Snatchers,’ in which alien plant-pods sneakily replace ordinary people with doubles that look and talk almost exactly like human beings aside from their obsession with conformity.