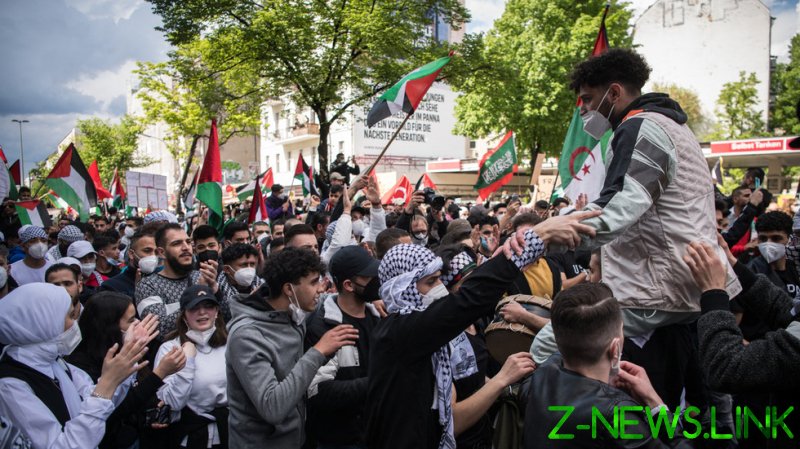 Chaotic scenes unfolded in Berlin’s district of Neukolln as police officers attempted to break up a massive demonstration in support of the Palestinians. Some 3,500 people joined the rally to condemn what they called “barbaric aggression” by the “occupying power.”

The protesters were moving in a large crowd while waving the flags of the State of Palestine and carrying placards that read: “Zionism is terrorism” and “Child Killer Israel.” Some Turkish flags were also seen in the crowd that chanted “Free Palestine.”

The police repeatedly urged the protesters to comply with the Covid-19 rules, involving social distancing and a requirement to wear face masks in public but the demands were “unsuccessful,” law enforcement said in a Twitter post, adding that even the rally organizers admitted that they were “unable to exert influence on the participants.”

The rally at Neukolln’s Hermannplatz square was organized by the German branch of the Samidoun group under the slogan ‘Day of Political Prisoners of Palestine’. The rally organizers have links to the Popular Front for the Liberation of Palestine (PFLP), according to the German media. The PFLP is described as a Marxist–Leninist movement that does not recognize Israel.

Around a half an hour after the protest started, the police sought to break up the rally and disperse the crowd. While some protesters left the scene, between 800 and 1,200 demonstrators stayed and started pelting the officers with bottles and paving stones. They also fired flares and smoke pellets.

A video published by Ruptly news agency shows the protesters throwing various projectiles at the police as well as even attacking the officers at one point. The police responded by using tear gas. The footage also shows the officers brutally detaining some of the demonstrators.

The clashes in Neukolln continued until the early evening. Police confirmed that the scuffles ended up with “numerous police officers injured” and some demonstrators arrested but did not provide any specific details on the number of those injured or detained.

A reporter from the German daily Die Welt, Martin Heller, who was covering the protest, was hit by a bottle thrown by one of the protesters, the journalist said in a Twitter post. Elsewhere, the chief Europe correspondent of the Israeli broadcaster Kann, Antonia Yamin, had a firecracker thrown at her apparently because someone heard she was reporting in Hebrew.

Pro-Palestinian demonstrations were also held in several other German cities, including Hamburg, Colonge, Stuttgart and Hanover. They were attended by hundreds of protesters but went off peacefully, according to the police.

In Leipzig, a pro-Palestinian rally faced a rival “pro-Israel” demonstration. Even though tensions between the two groups of protesters ran high, they did not result in violence, the local police said.

The developments in Germany came amid the ongoing violent conflict between Israel and Palestinian militants in Gaza. Sparked by an Israeli court case regarding the evictions of some Palestinian families from an East Jerusalem neighborhood, it quickly spiraled from protests to a violent standoff between the Israeli Army and Palestinian Hamas militants.

Hamas launched thousands of rockets at Israeli cities while the Israel Defense Forces (IDF) responded by unleashing massive airstrikes against Gaza. Hamas attacks have killed nine Israelis while the IDF strikes have claimed the lives of more than 100 Palestinians, according to local health officials.

Earlier, Germany also witnessed a series of attacks targeting synagogues amid the conflict in the Middle East. The incidents sparked a wave of indignation from German officials who said that anti-Semitism will not be tolerated on German soil.