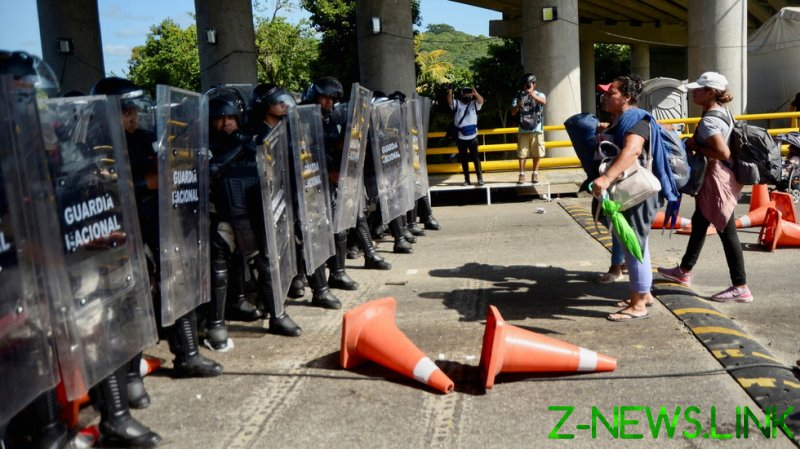 The Mexican National Guard was deployed to Chiapas in recent days to halt a migrant caravan that set off on foot last month from the country’s southern border with Guatemala. Around 3,000 people are currently moving north to Mexico City in the hope of eventually reaching the US border.

Videos published on social media on Thursday showed migrants hitting the National Guard members with sticks and pelting them with stones as the officers, clad in full riot gear, tried to advance on the caravan in a tight formation.

At one point, the migrants apparently succeeded in forcing the National Guard troops into retreat, with one clip showing officers backing away as the crowd continued its onslaught.

Unverified videos circulating online also depicted one officer lying on the ground seemingly unconscious as several people, apparently migrants, are seen hitting and kicking him. Several others, however, are seen coming to his aid. Another video shows a group of people attempting to remove the man’s gear. Reports in local media suggested that they did so to help the officer breathe freely and eventually brought him to his fellow guardsmen.

Some migrants also told Mexican media that the violence was initially provoked by the Guard’s “brutal” detentions of women and children that were with the caravan. The National Guard denied the charges, insisting that it “at no time responded to the aggression” and “rejects all forms of violence.” The force said that five of its members suffered “considerable” injuries in the street battles.

One of the caravan’s organizers, Luis Garcia, told Reuters that at least two migrants were “badly beaten” by officers. Some migrants were also reportedly detained.

Thursday’s clashes broke out not far from an area where a Cuban migrant was shot dead by National Guard troops on Sunday as they were seeking to stop another caravan heading toward the US-Mexico border. The incident was condemned by Mexico’s President Andres Manuel Lopez Obrador, who said that the officers had no reason to fire on the migrants, who were in a vehicle that defied an order to stop. Obrador argued that the guardsmen used excessive force, as the migrants posed no threat to them, insisting that there were other ways to arrest or detain them.