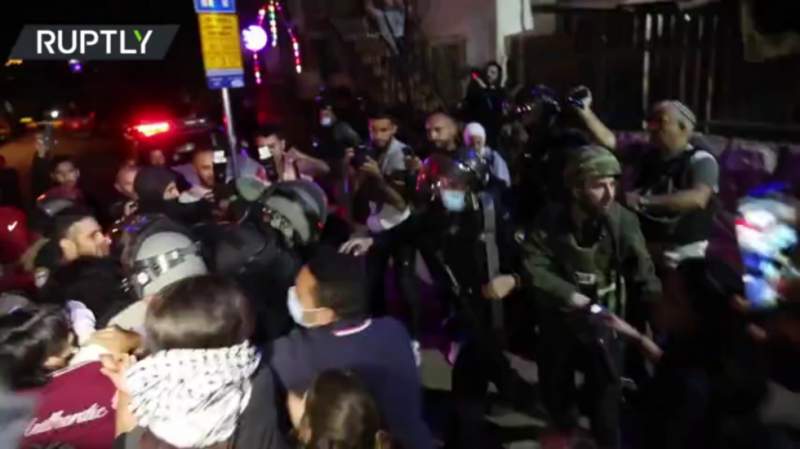 Dozens of Israeli officers in riot gear confronted the Palestinian protesters in East Jerusalem late on Wednesday, deploying water cannons and tear gas. Footage from RT’s video agency Ruptly shows police forcing protesters to the ground, dragging and hitting both men and women. Some needed medical assistance, as seen in the video, while others were blindfolded, handcuffed and surrounded by the police.

The demonstrators gathered in Sheikh Jarrah, close to Jerusalem’s walled Old City, to support several families who are being forced to leave their homes. Israeli forces fired tear gas and used water cannons, while demonstrators threw chairs and fireworks.

“They were throwing wastewater at us and the houses. A woman was attacked, as [police] couldn’t see through the water and did not differentiate between young and old, [they] attacked without any responsibility,” local resident Maysoon Ghosheh told Ruptly.

The violent clashes are the latest amid unfolding unrest in the area. For several days, police have been present in Sheikh Jarrah forcibly dispersing the crowds, with at least 12 Palestinians having been injured since Sunday, Reuters reported citing Palestinian medics. Since the start of the year, at least one Palestinian fatality and more than 210 incidents of settler violence have been recorded, according to a recent UN report.

Sheikh Jarrah residents have been organizing sit-ins to protest against the imminent threat of eviction facing at least six families who have lived there for generations. Seven more families are facing displacement by August, with nearly 60 locals, including 17 children, to be moved in total. A district court previously ruled that Palestinians must vacate their houses in favor of a company intending to develop the area for Jewish families.

There is a law in Israeli legislation that provides a legal path for Jews to reclaim Jewish-owned property in East Jerusalem from before 1948. A hearing scheduled at Jerusalem’s High Court for Thursday is set to decide whether to give the Palestinians a right to appeal the lower court’s ruling to displace them.