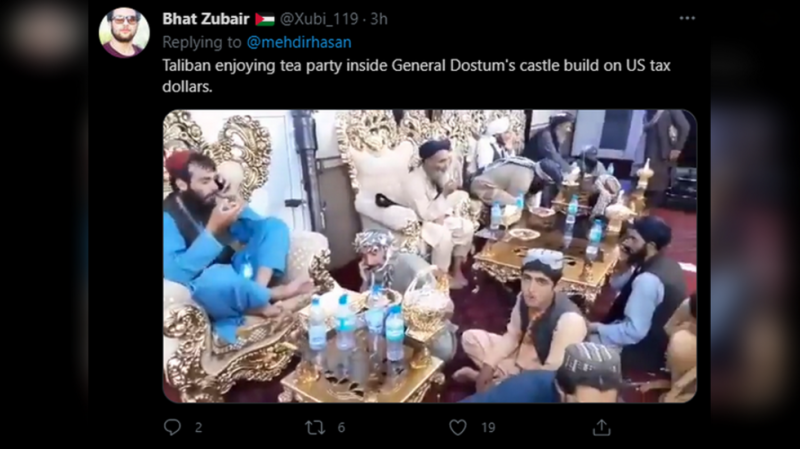 In videos resembling an episode of MTV’s iconic house tour program ‘Cribs’, Taliban fighters can be seen lounging in the ostentatious interior of former vice president Dostum’s residence in Mazar-i-Sharif. The northern city was captured by the militants on Saturday, after government forces there allegedly surrendered shortly after fighting broke out.

Dostum, a seasoned warlord who aligned himself with the US-backed Northern Alliance during the 2001 invasion of Afghanistan, had vowed to defend Mazar-i-Sharif from the Taliban onslaught. But he reportedly fled the city after government forces handed over their weapons and equipment to the Taliban as part of a “cowardly plot,” Atta Mohammad Noor, the former governor of Balkh province, told the media. Noor, who was commanding local militiamen when the city’s defenses collapsed, said both he and Dostum had escaped and were safe.

However, what Dostum left behind has both amused and angered social media observers. Footage shows cross-legged militants relaxing in overstuffed armchairs as others admire the mansion’s glitzy decor. One clip shows them examining what appears to be a gold tea set.

The videos represent a “searing propaganda victory” for the Taliban, one pundit argued, noting that Dostum was a “near-mythic” figure who had once controlled vast swathes of Afghanistan.

Others expressed dismay that the Taliban fighters had enjoyed a “tea party” in a “castle” allegedly built using US tax dollars.

“Whilst General Dostum lived in opulence, many of his soldiers went unpaid. One of the reasons for the army’s collapse,” British politician and former soldier Henry Bolton complained.

Political pundit and MSNBC host Mehdi Hasan said the footage served as a reminder that the “corrupt warlords we allied with in Afghanistan all these years have been pretty awful.”

During his years of cooperation with the United States, Dostum has faced repeated accusations of corruption and human rights abuses. He spent part of 2018 in exile, following accusations that he had ordered a political opponent to be sexually assaulted.

The Taliban didn’t linger long in Dostum’s sumptuous lodgings, however, beginning an assault on Kabul on Sunday.