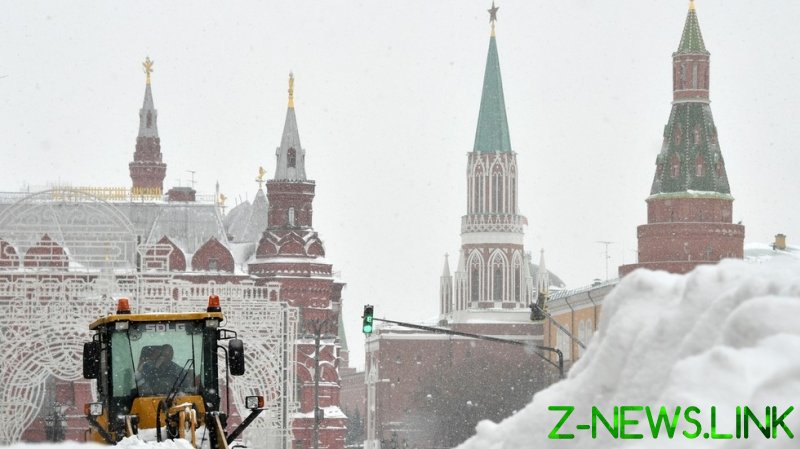 The adverse weather befell the city and the surrounding region on Friday, and the snow continued falling for over two straight days. A snowfall this intense hasn’t been registered in the city for some 50 years, with the current record being held by one in 1973.

The mountains of snow brought multiple roads across the city to a literal stop overnight.

Heavy vehicles fared especially poorly in the thick snow, with trucks pictured sliding on the roads and failing to ascend even the slightest slope.

Multiple videos circulating online show good samaritans in SUVs trying to tow the trucks across the city – and some even managing to pull that off.

The Moscow Ring Road, the city’s crucial traffic artery, has been clogged with heavy trucks, that in some spots managed to move only a few meters in several hours.

The ultimate traffic jam at the ring road prompted some motorists to break all the rules and attempt to drive on the wrong side of it, footage circulating online shows.

Some motorists – and taxi passengers – have given up on their vehicles entirely, braving the weather on foot. Those trying to reach the city’s airports to catch their flights were apparently the most desperate to take this option.

Those who got to the airports have, however, discovered that air traffic is also being disrupted, with dozens of flights delayed. While the terminals have been all but deserted lately due to coronavirus pandemic, they were filmed utterly crowded with passengers on Saturday.

The amassed snow has damaged several buildings across the Moscow Region. The roof of a gym has collapsed, but luckily it was empty during the incident. Images from the scene show the building filled with snow and pieces of the roof that was completely destroyed.

The snow has also obliterated a light hangar outside Moscow, while several people were working inside. One person was injured during the collapse, while at least two more were trapped under the rubble.