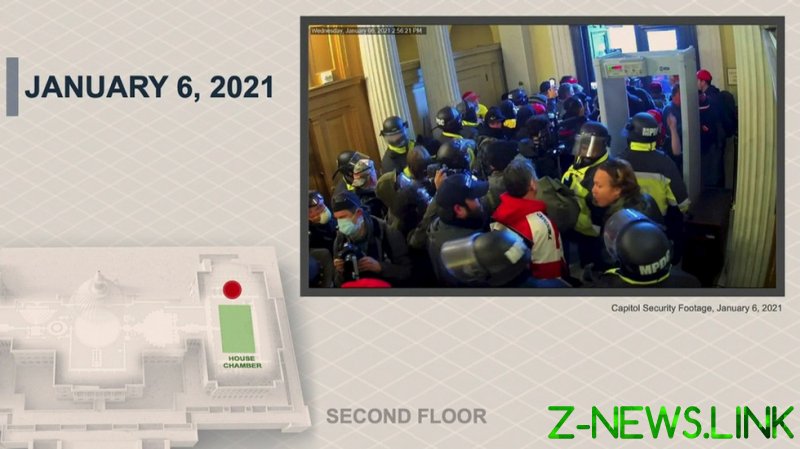 Previously unreleased security footage from the January 6 attack shows Capitol Police officer Eugene Goodman passing Senator Romney (R-Utah) in a hallway after rioters had breached the building on the floor below. Goodman is seen directing Romney to turn around, leading him to safety. The same officer was made famous last month by a video showing him luring rioters away from the Senate chamber, and was again widely hailed as a hero after Wednesday’s impeachment hearing.

“It tears at your heart and brings tears to your eyes,” said Romney – a vocal Trump critic and one of just six Republican senators who voted to proceed with the trial – after viewing the footage, adding that he didn’t realize the danger he was in at the time.

Another video shows former Vice President Pence and his family being quickly escorted out of the Senate chamber and down a stairway after a crowd had forced entry into the Capitol.

“As Pence was being evacuated, rioters started to spread throughout the Capitol. Those inside helped other rioters break in through doors in several locations around this entire building,” said US Virgin Islands Delegate Stacey Plaskett, who presented the Democrats’ reconstruction of the riot during the impeachment proceeding.

Though Democrats presented the dramatic recordings as proof of the chaos caused by Trump’s incendiary rhetoric, arguing he “incited” the riot with repeat charges of fraud in the 2020 race, some lawmakers across the aisle weren’t impressed with the evidence.

“I’ve said many times that the president’s rhetoric is at times overheated, but this is not a referendum on whether you agree with everything the president says or tweets,” said Texas Senator Ted Cruz. “This is instead a legal proceeding.”

They spent a great deal of time focusing on the horrific acts of violence that were played out by the criminals, but the language from the president doesn’t come close to meeting the legal standard for incitement.

Another Trump ally, Senator Josh Hawley (R-Missouri), also met the footage with a yawn, saying “Nothing new here, for me, at the end of the day.”

However, some high-profile members of the GOP, such as Senate Minority Whip John Thune of South Dakota, appeared to find the presentation compelling, saying the House impeachment managers made a “very effective” case on Wednesday.

Trump’s defense team previously focused on the legality of the trial, arguing lawmakers have no authority under the Constitution to try a president after he leaves office. With the trial proceeding regardless, his lawyers will likely have to pivot to a different defense, with Trump attorney Bruce Castor telling Senators on Tuesday that he would shift his approach “on account that we thought that the House managers’ presentation was well done.”