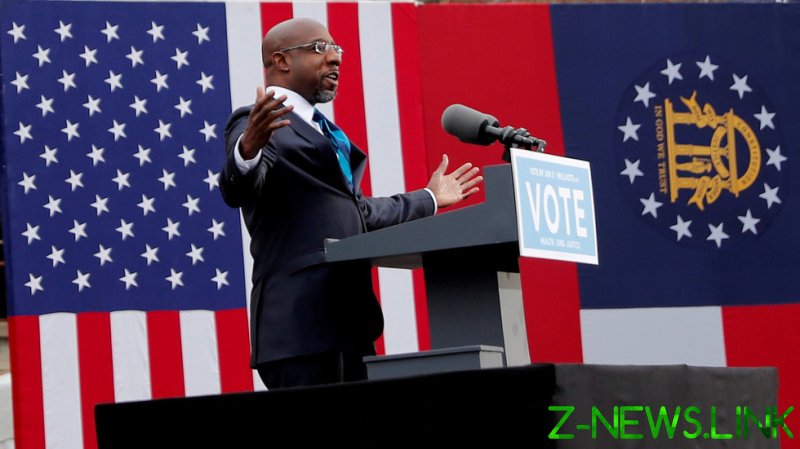 Video of the incident, which occurred back in March, was made public for the first time on Tuesday night, as it was reported on Fox’s Tucker Carlson Show. It showed an officer interviewing Warnock and his then-wife, Ouleye Ndoye, after she alleged that he ran over her foot with his car as he tried to leave with the couple’s two children following an argument.

Asked if he had run over Ndoye’s foot, Warnock said, “I don’t think so.” He said she wouldn’t let him close the rear passenger-side door, so he got back in and began to drive the car slowly. He added that when she screamed that he had run over her foot, he didn’t believe it because he had barely moved. Ndoye said the car was moving slowly and didn’t cause her foot to bleed.

Warnock was not charged with a crime, and a medical exam reportedly found no sign of injury to Ndoye’s foot. But she also alleged a pattern of abusive behavior. “I’ve been trying to be very quiet about the way he is for the sake of my kids and his reputation,” Ndoye told police. “I’ve tried to keep the way that he acts under wraps for a long time, and today, he crossed the line. . . . He’s a great actor. He is phenomenal at putting on a really good show.”

The video surfaced just two weeks before Georgia holds its runoff elections for two Senate seats on January 5. The outcome will determine which party controls the Senate, and a Democrat sweep would position the party to pass President-elect Joe Biden’s agenda through both houses of Congress.

With those high stakes apparently in mind, Democrats and Republicans came down on opposite sides of Warnock’s domestic dispute.

Daily Beast contributor Justin Baragona faulted Fox’s Carlson for billing the incident as an “altercation,” saying, “This is footage of a police report after she accused Warnock of running over her foot. Cops said they saw no visible signs of injury.”

Self-described liberal Democrat David Weissman said conservatives are “spreading defamation on the personal life of the Rev. Warnock because they know they would lose solely on policy. This is a typical right-wing tactic.”

Other left-leaning observers agreed, framing the video as a political tactic while dismissingallegations by Warnock’s now ex-wife. For some commenters, the mere fact that Fox reported the incident was proof enough that Ndoye’s foot wasn’t run over. Others said her story didn’t add up because she wasn’t injured.

Still others deflected the allegations by noting that Republicans have done the same or worse things. Some Democrats said they would temporarily conceal personal knowledge of wrongdoing by Warnock because of the “current state of the GOP.” Some openly called Ndoye a liar.

“Interesting that this has come to light now,” a self-described Biden supporter and “resistance” member said. “I don’t condone physical violence; however, she didn’t have a single bruise or mark on her foot. I know what abuse is like. This is just a lie.”

Republican observers saw the footage completely differently and called defenders of Warnock hypocritical for failing to ‘believe all women’ – a Democrat slogan that was popularized when US Supreme Court nominee Brett Kavanaugh was accused of sexual assault in 2018.

“Disgusting, and ‘Me Too’ is silent,” conservative journalist Jack Posobiec said. He added that Democrats will ignore the abuse allegations against Warnock, much as they shrugged off such accusations against Minnesota Attorney General Keith Ellison. Another observer tweeted: “Election is over.Women don’t matter anymore.”

Journalist Curtis Houck pointed out that mainstream media outlets, including CNN, MSNBC and the three major broadcast networks, have ignored the story. Conservative commentator Greg Price said the fact that the video didn’t surface publicly until shown on an opinion show nine months later showed that Georgia media outlets also sat on the story to protect the Democratic candidate.

“The media exists to serve the interests of the radical left,” tweeted Kaelan Dorr, a former campaign aide for President Donald Trump. “This man is running for Senate, and journalists were so busy carrying water for Sleepy Joe that they’ve let a literal wife beater run for Senate since March.”