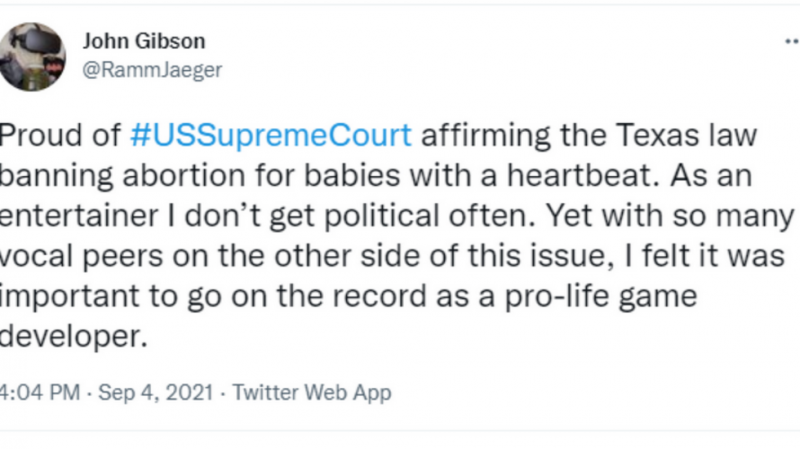 Chief executive John Gibson has “stepped down,” effective immediately, Tripwire said on Monday. The reason? “His comments disregarded the values of our whole team, our partners and much of our broader community,” the company said. “Our leadership team at Tripwire are deeply sorry and are unified in our commitment to take swift action and foster a more positive environment.”

The comments in question came two days earlier, when Gibson praised the US Supreme Court in a Twitter post for affirming the Texas ban on abortions for pregnancies far enough along for a heartbeat to be detected.

“As an entertainer, I don’t get political often,” Gibson explained in his post. “Yet, with so many vocal peers on the other side of this issue, I felt it was important to go on the record as a pro-life game developer.”

The ensuing backlash showed that there’s apparently no place in America for a “pro-life game developer,” at least not one who is open about his views.  Beyond threats of boycotts, at least one of the developers whose games Tripwire publishes, Shipwright Studios, announced that it’s cutting ties with the company.

“We cannot in good conscience continue to work with Tripwire under the current leadership structure,” Shipwright said. “We will begin the cancellation of our existing contracts effective immediately.”

Another game developer, Torn Banner Studios, announced that it disagreed with Gibson’s views. “This perspective is not shared by our team, nor is it reflected in the games we create,” the company said. “This statement stands in opposition to what we believe about women’s rights.”

Tripwire tried to reassure the angry critics, saying interim chief executive Alan Wilson will “take steps with employees and partners to address their concerns.” Those efforts will include a company-wide “town hall” meeting, perhaps to ease any worries that anti-abortion thoughts haven’t been completely purged from the organization. Ironically, Tripwire said it will promote “open dialogue” after its CEO lost his job for expressing his personal views.

It’s not clear whether Gibson’s departure will placate the cancel mob. Podcast host Christian Spicer raised concern that the former executive could still have an income. “Does John still make money from Tripwire, though?” Spicer asked. “Stock? Profit-sharing? Member of the board?”

Georgia-based Tripwire has developed such games as the ‘Killing Floor’ and ‘Rising Storm’ franchises, which sold more than 12 million copies combined. It also publishes games for other developers, such as ‘Chivalry 2,’ produced by Tom Banner Studios.