Home / WORLD / ‘Victory over death itself’: Why the 9th of May is so important for Russians

‘Victory over death itself’: Why the 9th of May is so important for Russians 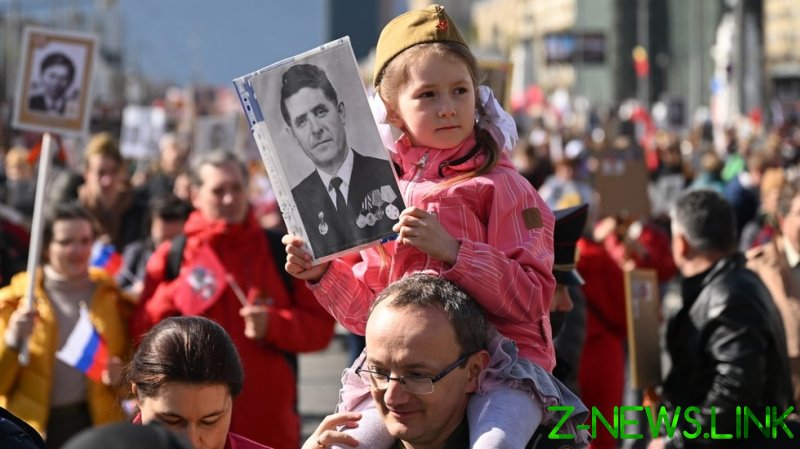 May 9 is a special holiday for Russians, and the great attention we pay to this date often seems unusual to people from other countries and cultures. Indeed, to say that “for Russians, the Second World War ended yesterday,” it is not far from the truth.

Evgeny Dering was a veterinarian who treated horses. He lived in St. Petersburg, which was then called Leningrad. On June 22, 1941, he went off to war. Before he left, he asked his wife Regina to take their children – two daughters and a son just born in April – and leave for the depths of Russia. As it turned out, this request saved their lives. A few days later, Regina took her children to the village of Makarevo, in the Nizhny Novgorod oblast (then Gorky), and settled in a 15th century convent that had been set up as a shelter for refugees like her. More than 600,000 Leningrad residents died of hunger during the great siege of the city. Regina survived, as did all her children, but she never saw her husband again. In October of 1943, Evgeny Dering was killed by artillery shelling at a small marshy bridgehead on the Dnieper River…

For Russians, Victory Day is literally a celebration of victory over death – one in which everyone was involved. Almost every family has a story about what their ancestors did during the war. These stories vary greatly, but they are almost always dramatic. Many have tales about people who died. The Soviet Union lost more than 27 million people during the war. About 12 million were soldiers and officers, while the rest were civilians who died at the hands of the Nazis during the fighting or from hunger. By the time Berlin had been taken and Adolf Hitler had committed suicide in his bunker in 1945, the USSR was a country where almost everyone mourned someone. A person who had lost ‘only’ friends was considered lucky.

The Nazis waged war with extreme brutality. Jews were never spared, but nothing good awaited anyone else either. A Belarusian government database contains the names of 9,000 villages that were burned by the invaders during the war, and this was only in one of the Soviet Union’s occupied republics. In many of the destroyed hamlets, the number of victims is often identical to, or nearly matches, the number of their inhabitants, at the time. The most common method of extermination was to drive the population into a barn and set it on fire. People also died from shelling and starvation or were simply callously shot. Criminal acts committed against the civilian population were exempt from accountability under a special order issued by Hitler.

A red cross provided no protection during the war – ambulances and ships were often destroyed by direct fire. No allowances were made for age either – children were killed on a par with adults.

However, for us, the war is not just a story of monstrous cruelty. It is a legend of incredible national unity, where an ordinary worker and a world-renowned composer could converge in a volunteer fire brigade, and a young bohemian from Moscow could share bread with a miner from the Donbass and an Asian conscript from a Kazakh steppe village in a trench. It is a story of the remarkable ability not to give up when all circumstances seem to be against you and resistance seems futile. After each lost battle, the surviving officers would analyze their failures and try to figure out what they had done wrong and how to change the situation. It is a story of amazing self-sacrifice, when recruiting volunteers for a new division resembled a competitive university admissions process.

And it is a story about military triumph. The Third Reich was a deadly enemy. The five-million strong invading army reached the Caucasus mountains and threatened to take Moscow and Leningrad, but nevertheless ended up being defeated. For us, it is a story about how we shed torrents of blood, but the army that came to kill us was completely destroyed, the enemy capital was taken by storm, the dictator who ordered the invasion committed suicide, and the banners of the losing army were thrown against the walls of the Kremlin. We paid a terrible price, but our triumph was absolute.

In Russia, you rarely hear people say ‘World War II’. The term formulated in those times, ‘The Great Patriotic War’, is still in use today. This is not an attempt to somehow disregard what the Second World War was for others, but a desire to emphasize that, for us, it is still a kind of special event that goes beyond an ordinary armed conflict. For us, it is a truly heroic epic. It is the Iliad, a number of whose heroes are still alive and walking among us today. They are very old now, and yet some are still here. Our Ajax still sometimes goes out into his yard in the evenings, jingling medals for storming Vienna, to sit on a bench; our Diomedes can be seen every morning walking his dog.

The memory of the war has influenced many aspects of life in Russia. You can hear it in personal stories, see it in culture, and even sense it in politics. Some of our government’s obsession with the security of the country’s western borders is a vestige of exactly that catastrophe, when we had to retreat to the very edge with our backs pressed against the wall. This memory seriously affects our relations with our neighbors and is nearly impossible to erase.

But perhaps the main thing that we learned from the upheavals of that era is a simple truth: we can endure any difficulties, stand our ground, and rebuild our country after any trial. It is a memory not only of a feast of death, but also the triumph of life.

…Evgeny Dering’s son, Gennady, never saw his father. He did not return to Leningrad and spent his childhood and youth in Makarevo. Fifteen years after the war, he met a girl named Albina, whom he married. These are my grandparents. They are still alive. Their daughter is my mom. Historical events often turn out to be surprisingly close to us today.