Victory day belongs to the Russian people: Westerners must realize it celebrates destroying the Nazis, not honoring Stalin’s USSR 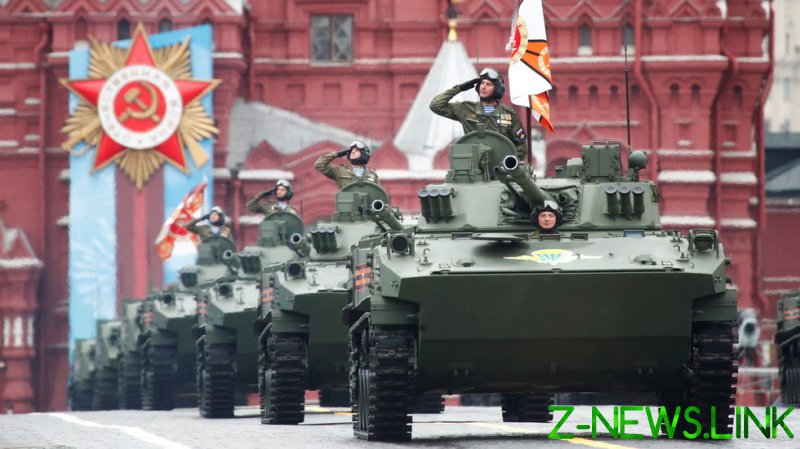 These celebrations are often portrayed in the West as an effort to rehabilitate the USSR and its wartime leader, Joseph Stalin. In reality though, Moscow is far from eager to rewrite history, and most Russians are more than capable of commemorating the Soviet victory without endorsing Stalinism.

However, as preparations for the anniversary got underway, the Georgian strongman has again been making news. Just a week ago, in the Caucasian town of Dagestanskiye Ogni, a bust in honor of Stalin was erected. Unlike much of his legacy, it was short lived, and local authorities ordered its removal only four days after it was unveiled.

At the same time, the revolutionary’s record has been making waves in other ways. In the eyes of most Russians, the USSR deserves credit for liberating Europe from Nazism. Many people living in other former Eastern Bloc states, however, take a different view on things, and see the Soviets as occupiers. In their opinion, communism and Nazism are reprehensible in equal measure.

That historical debate has decidedly political consequences. Attempts to portray the Red Army not as a liberating force but as a brutal occupier serve as a means of pushing modern Russia out of European politics. Russian celebrations of the victory over Germany are portrayed as an endorsement of Stalinist oppression, and therefore as a sign of Russia’s malign character and its supposed ambitions to reassert Moscow’s control from the Baltic to the Black Sea.

In response to this growing campaign, the Russian State Duma began considering legislation last week which, if passed, will forbid people living in the country from comparing the USSR to Nazi Germany. This follows an amendment to the constitution last year stating that, “diminishing of the significance of the people’s achievement in defending the Fatherland is not permitted. Any pronouncement which smears the achievement of our citizens is unconstitutional.”

To opponents of the Kremlin, such acts are proof that the Russian state refuses to accept the crimes committed by the Soviet Union during WWII, such as the massacre of Polish officers at Katyn. This in turn is taken as evidence that Moscow has still not turned its back on Stalinism and its bloody methods.

Add to this the occasional efforts of modern-day Russian communists to put up statues to Stalin, and the result is an accusation that the country is working to legitimize its own government by invoking the memory of the USSR’s most famous leader.

For instance, when communists in the Siberian city of Novosibirsk erected a monument to the former Soviet premier in 2019, the Western press responded with a series of articles claiming that the state itself was attempting to “rehabilitate” Stalin. The Washington Post, for instance, published an article claiming that President Vladimir Putin “attempts to position himself” as “Stalin-lite… the Russian president is actively rehabilitating the Soviet dictator’s record, working to paint him as a strong leader who save the world from fascism. The goal is to bolster Putin’s own ‘strongman’ leadership style [sic] in the eyes of ordinary Russians.”

In a similar article, the Guardian declared that “Putin’s rise to power came accompanied by a new version of patriotism relying on ‘heroic’ and ‘bright’ aspects of the Soviet past. An image of Stalin as a strong leader who had ensured victory in the second world war and led a Soviet superpower re-emerged.”

It concluded that, “in Russia, it is obvious to many of us that our country’s return to democracy will be impossible as long as we fail to condemn Stalin and the system he created.”

The reality is rather different. While there is some admiration for the Georgian revolutionary in Russia on account of his wartime leadership, people are also acutely conscious of the negative aspects of his rule. Furthermore, initiatives to “rehabilitate” Stalin come not from the state, but from ordinary citizens, and Moscow’s response has been far from warm.

We can see this in recent efforts of groups to erect statues to the former leader. In Novosibirsk, communists were unable to obtain permission to erect a statue of Stalin in a public place. In the end, the mayor gave permission only on the condition that it be put up on private land. In Dagestan, as we have already seen, the local government took a new installation down after just four days. Clearly, the authorities do not view such initiatives very positively.

Nor do those same officials attempt to play down the negative side of Stalin’s rule. The “Concept of State Policy on the Immortalization of the Memory of Victims,” confirmed by the Russian government in August 2015, stipulated that, “attempts to justify the repressions by the particular circumstances of the time or generally to deny them as a fact of our history are not permissible.”

In July 2019, the Permanent Commission on Historical Memory of the Council of the President of the Russian Federation issued a statement saying that its members did not “call for the establishment of statues to Stalin on private plots of land to be banned.” However, it noted, “civil servants of all levels must know that it is impermissible to allow state or municipal land or buildings to be used for this purpose. Such acts not only contradict morality and respect for our deceased, innocently suffering predecessors, but also contradict official state policy.”

As for Putin himself, he made his position clear when he attended the opening in October 2017 of the ‘Wall of Grief’, a monument in Moscow dedicated to the victims of communist repression. This is not even the only state-backed monument to this purpose. Others include the Sretensky Monastery, devoted to the ‘new martyrs’ (i.e. Christians killed by the communists), and the Butovo Shooting Range Memorial, located on the site of what was an NKVD execution ground during Stalin’s Great Terror.

In short, the idea that the Russian state is working to rehabilitate Stalin is far from true. Equally false is the idea that commemorating the Soviet victory in WWII is tantamount to celebrating communist repression. By the same token, when Britons celebrate their country’s role in that war, they’re not condoning the crimes of the British Empire. And when they praise Winston Churchill for his wartime leadership, they’re equally not endorsing the more questionable aspects of his personal character and past.

Similarly, Russians are capable of separating the good from the bad in their shared history. Victory over fascism in 1945 came at enormous cost, but was also a huge national achievement. Millions of Russians will choose to mark the anniversary this Sunday, and so they should. Victory Day is theirs, not Stalin’s.