Home / WORLD / Victoria’s creeping totalitarianism is based on wild overreaction to Covid, and the rest of the world is going down the same path

Victoria’s creeping totalitarianism is based on wild overreaction to Covid, and the rest of the world is going down the same path 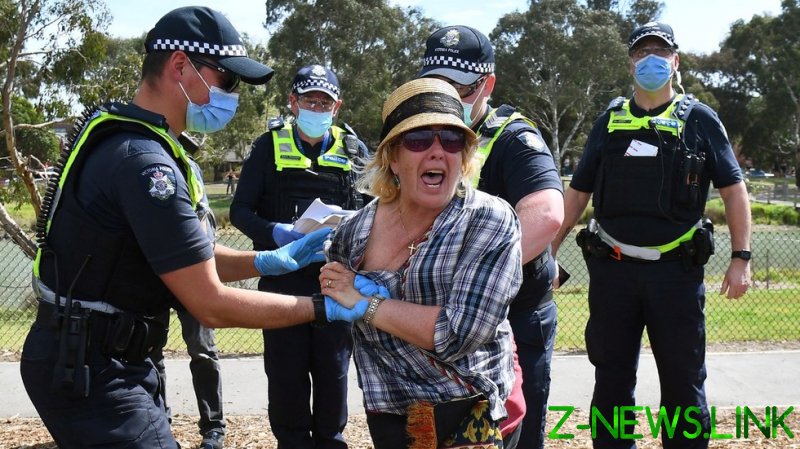 Americans would be wise to pay attention to what’s going on Down Under. Victorian Premier Dan Andrews has gone on a police-state shopping spree to rival the Patriot Act, recently introducing a bill that gives the state government the power to preemptively detain “high-risk” persons, indefinitely, in quarantine facilities based on mere suspicion they might not comply with self-isolation orders.

This is being justified using Covid-19 stats that even the fear-porn-loving media establishment has acknowledged are probably very much inflated, based on a test whose creator was reportedly horrified by the thought of using it to diagnose viral infection. Yet the same media establishment has embraced Andrews’ totalitarian lockdown as a model the US should adopt.

Sounding more like a cartoon villain than a politician, Andrews earlier this week warned Melbourne residents that the “odds are very poor” they might escape the “ring of steel” his government has constructed around the city. With the rest of the state’s lockdown loosening a bit on Thursday, Melbournians still under the stricter regulations are threatened with $5,000 fines if they try to flee to saner climes. And if the thought of being preemptively detained for months for being “conspiracy theorists” doesn’t scare residents away from thought crime, the provision in the Omnibus Bill that allows the government to remove children from their parents for up to 30 months certainly will. The bill passed Victoria’s lower house last week.

Victoria declared a state of disaster on August 2 with 123 coronavirus deaths across the state over the entire course of the pandemic, citing a sudden, inexplicable spike in case numbers in its decision to lock public housing residents in their apartments and send military service members from door to door to ensure citizens were obeying.

Video of police dragging a pregnant woman out of her home for merely promoting an anti-lockdown protest in her small town in solidarity with Melbourne residents  triggered international outrage, and the economic and psychological condition of people there has deteriorated rapidly over the past two months.

Nor has it been just mental health that has suffered under ‘Dictator Dan’’s lockdown. Coronavirus deaths have actually soared, from 123 when the lockdown was imposed on August 2 to a whopping 773 as of Wednesday. Of course, ‘whopping’ is relative – given the tens of thousands of people supposedly infected, one might expect considerably more deaths, at least until one recalls that 90 percent of ‘cases’ diagnosed via PCR test likely carried too little virus in their systems to experience any symptoms or infect others. While it’s good news for all the Australians who won’t die of Covid-19, it’s bad news for those now locked in their homes because of those inaccurate numbers.

Even setting aside the false positives, the terrifying computer models that inspired so many countries and states to lock down have long since been exposed as flawed. However, the policies they inspired have not been re-examined. Given the enormous collateral damage that comes from shutting down a country’s economy – statisticians warned months ago that more Australians would die of suicide than from the virus by a factor of 10, with a significant portion of those deaths from young people, while UK and US medical experts have warned the shutdowns are killing more than the virus they’re meant to stop – there’s no excuse for locking up the young and healthy in order to protect the elderly. The fact that those same elderly are more likely to die of non-Covid-19 causes when kept in social isolation only adds insult to injury.

No one wants to admit they’ve made a mistake. Premier Andrews is being praised by the international media for seizing even more powers, and plenty of US and UK leaders are eager to follow in his footsteps. Rarely is there an attempt to correct bogus statistics, despite widespread discoveries of fraudulent (or simply incompetent) record-keeping in the US and UK. Even the understanding that most forms of Covid-19 testing are wildly inaccurate has done nothing to slow the enthusiasm for forcing it down a population’s throat (literally).

And Andrews is far from the only leader inflicting what can only be termed cruel psychological experiments on his people under the guise of a virus response. Whether it’s New Zealand’s pledge to lock up everyone who tests positive and their family members in quarantine facilities, Scottish FM Nicola Sturgeon’s ban on household visits, Los Angeles Mayor Eric Garcetti’s threat to shut off water to homes and businesses that host parties, or the US state governors who demanded nursing homes accept Covid-19 positive patients despite the risk to their charges, it seems for all the world that every wannabe-dictator in the English-speaking ‘democracies’ is racing to see who can cross the totalitarian finish line first.

While we look on in horror at what’s going on in Victoria, we must do what we can to halt the growth of totalitarianism in our own countries.