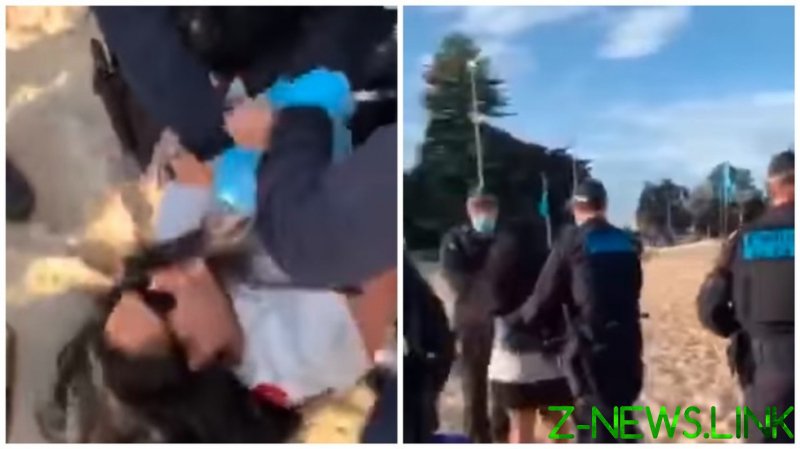 Footage of the dramatic arrest circulated online, showing a handful of armed police officers towering over a woman – described as pregnant by local media – at the Altona beach in the Melbourne area. An officer is seen trying to put a mask on the detainee as his colleagues handcuff her and repeatedly tell other beachgoers to stand back.

People filming the incident could be heard shouting, “What did she do? Why are you arresting her?” As tensions grew, onlookers swarmed the police squad, yelling insults at officers.

Still, this public uproar didn’t stop law enforcers from walking the woman off the sand. Victoria police claimed she was found to be more than 5km away from her home, refused to provide identification to the officers, and was allegedly aggressive towards them.

The incident came on the back of warnings by Victoria state authorities that police could seal off beaches around Melbourne if residents neglect social distancing. “Victoria Police have powers. They have a steely determination to make sure people are following the rules,” State Premier Daniel Andrews warned.

These events came over a month after a Ballarat woman, also an expecting mother, was arrested and charged for “incitement” of an anti-lockdown gathering in Melbourne. The video of that incident was widely circulated on social media and triggered a massive backlash from the public.

Victoria, one of Australia’s most populous states, previously announced a roadmap for rolling back certain lockdown restrictions in Melbourne. Authorities have ended a nighttime curfew, meaning that residents can go outside at any time to shop for food and essentials, exercise outdoors, travel for permitted work or to attend classes, and to see a doctor.

People can also travel further than 5km from home for the above reasons, except for shopping and exercise. The 5km rule remains in place until at least October 19 and will be rolled back if Victoria’s 14-day average Covid-19 infection rate is less than five cases.

Andrews, however, signaled that lifting restrictions on people’s mobility is not a done deal. “There’ll be a time when that can come off, but exactly when that is, or might be extended… when that is, we can’t be certain now,” he said.

Australia has recorded just over 27,000 coronavirus cases and close to 900 fatalities. The bulk of the total infections and deaths are located in Victoria.