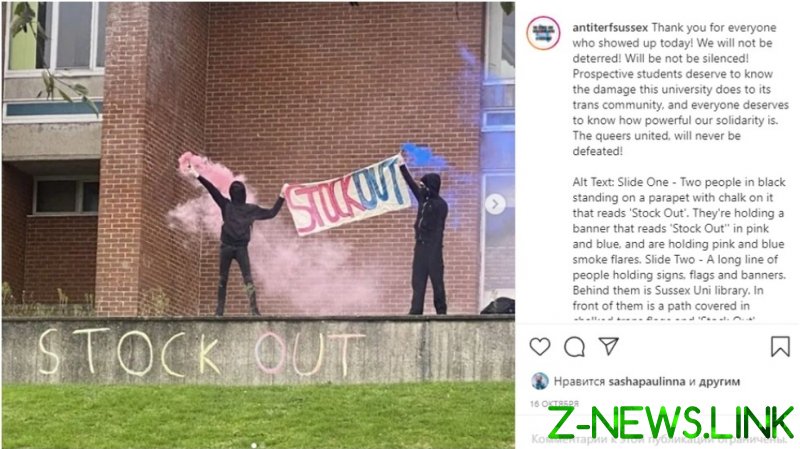 “This has been an absolutely horrible time for me and my family. I’m putting it behind me now,” the academic tweeted, announcing her departure after “a very difficult few years.” Stock thanked the university for stating that bullying and harassment for legally held beliefs is unacceptable.

In a letter published on the university’s website, Vice-Chancellor Adam Tickell called Stock’s departure “a loss to us all,” thanking the professor for her tenure at Sussex.

“The University has been consistent and clear that everyone in our community has the right to work and learn, free from bullying and harassment of any kind, which has not been the case for Professor Stock,” Tickell said. He added that it is unlawful to discriminate against anyone “on the grounds of sex and of philosophical belief.”

Stock, who describes herself as a feminist, has written books about various culture topics, including feminism, sexual objectification, and aesthetics. In December 2020, she was made an Officer of the Order of the British Empire (OBE) for her services to higher education.

Trans activists have accused Stock of being a transphobe and waged a largely anonymous campaign to get her fired. The calls intensified this month when flyers were posted around the campus and several people in masks were photographed holding signs that read: “Stock Out.”

An online group calling itself Anti Terf Sussex described Stock as “one of this wretched island’s most prominent transphobes, espousing a bastardised variation of radical feminism.” Trans activists use the term ‘terf’ to describe anyone they regard as a “trans exclusionary radical feminist.”

Stock denied the allegations of transphobia, but she has in the past criticised some ideas championed by transgender rights groups.

In a 2018 op-ed for the Economist, she argued that changing the concept of ‘woman’ to include anyone identifying as transgender will “cause unintended harms” to biological women. “I think we should also ask whether self-declaration alone could reasonably be the only criterion of being trans,” she wrote.

The professor wrote on her personal website this month that the toxic gender identity debate “has allowed a few students with totalitarian tendencies to have a disproportionate chilling effect on the rest.” She told the Guardian in May that the environment has made academics afraid that their careers will suffer if they speak their mind about transgender issues.