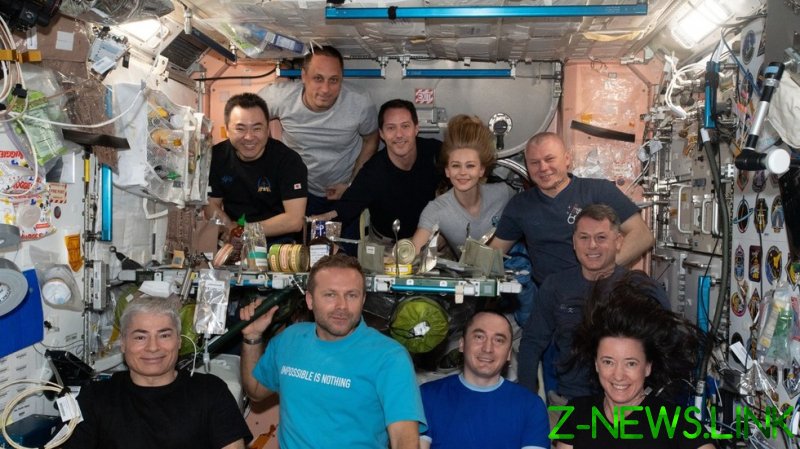 Actress Yulia Peresild and filmmaker Klim Shipenko have become the first-ever professional crew to travel to space to make a feature movie during a 12-day trip to the International Space Station (ISS). The project comes as a collaboration between Russia’s TV Channel 1 and the space agency Roscosmos, with RT providing special coverage of the mission.

The whole idea to produce a space movie in actual space will be beneficial for the space industry, both in Russia and elsewhere, Russian cosmonaut Sergey Ryazansky believes. The film crew mission has already garnered a lot more attention than regular space missions ever get, prompting a spike in society’s interest toward the spaceflight.

“Popularization of spaceflight is lacking nowadays,” Ryazansky said, adding that despite the concerns of the feasibility of the whole endeavor, it’s a good chance to increase public interest in space exploration.

“I hope that it will draw attention [to the spaceflight] and many young boys and girls will dream of becoming professional cosmonauts, that there’s a chance to prove themselves in contests to get into the cosmonaut roster to go not only to the low Earth orbit, but, maybe to the Moon or Mars,” Kotov told RT.

The film crew mission is a “natural enough progression” of the spaceflight, retired Canadian astronaut Chris Hadfield believes. Russian cosmonaut Andrey Borisenko shared a similar opinion, saying “humankind has already reached that level of space science and technology, when not only professional cosmonauts can go to space, but people of other trades – not only as space tourists, but to do their professional work.”

“Perhaps, filmmakers are some of the first professionals who can put their skills to good use there,” Borisenko told RT.

Still, filming in space is a very challenging task, with the environment entirely different from what movie makers have ever seen on Earth, Hadfield told RT. The first Canadian to walk in space, Hadfield took part in multiple space missions, including two flights of the now-defunct US Space Shuttle program, and has a lot of first-hand experience of trying to film in orbit.

“I’ve made a lot of videos, maybe a hundred in space. And I’ve made a music video and filmed it in space. It’s a very demanding space to try and get a good-quality video and audio production,” Hadfield said. “It’s a noisy environment, you can’t control the nose of the environment and you’re inside a laboratory, so it’s a difficult place to film and to do things of high quality.”

While little is known about the plot of the upcoming movie called ‘The Challenge’, it’s said to be revolving around a surgeon – Peresild – traveling to space to perform heart surgery on a stranded cosmonaut. The film’s plot has left the space professionals somewhat skeptical. Borisenko said he, first of all, wants the filmmakers to show the “truth” about cosmonaut work, reserving his opinion about the film until he at least sees its trailer. Kotov, a career physician himself, flatly rejected the possibility of major surgeries being performed in space altogether given modern levels of technology.

“A serious abdominal surgery is impossible in space due to technical issues – it’s a low gravity environment after all,” Kotov said. “Simple, trauma-related surgeries can be performed, cosmonauts are trained to do that. Anything more or less serious and requiring qualified help means the crew has to abruptly return back to Earth along with the patient.”

The impending return of the film crew will be somewhat challenging as well, given that the team will use a modified Soyuz spacecraft that can be operated by a single professional cosmonaut – while regular ships require two.

“The main difficulty with this flight is the lack of a human double. In a regular crew, the engineer has nearly the same qualifications as the commander. If something happens [to the commander] we’ll be able to rely only on the hardware. Thankfully, we have very good hardware…as well as very experienced commanders,” Ryazansky said.

The Soyuz MS-18 spaceship, piloted by seasoned cosmonaut Oleg Novitsky, undocked from the ISS early on Sunday at around 4.15am Moscow time (01:15 GMT), with the landing capsule touching down some three hours later in a remote part of Kazakhstan.