Ventura left the post of head coach of Italy 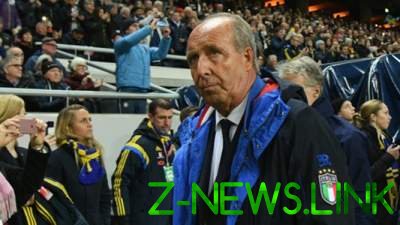 The inevitability of the departure of Ventura from the post of chief coach of the national team of Italy became obvious after the “Squadra Azzurra” in Milan, painted the goalless draw with Sweden and for the first time since 1958, failed to reach the final stage of the world Cup.

Ventura, contrary to expectations, refused to voluntarily resign. 69-year-old specialist for early termination of the contract demanded appropriate compensation. According to various sources Ventura can get from Federation of football of Italy from 700 to 1.3 million euros.

Ventura headed the Italian national team after Euro 2016, succeeding, who is at Chelsea, Antonio Conte. In the qualifiers the “Squadra Azzurra” battle for direct qualification for the tournament lost to Spain, and in the play-offs with a total score of 0:1 lost to Sweden.

Only the post of chief coach of the national team of Italy Giampiero Ventura has played 16 games – 9 wins, 4 draws and 3 defeats.