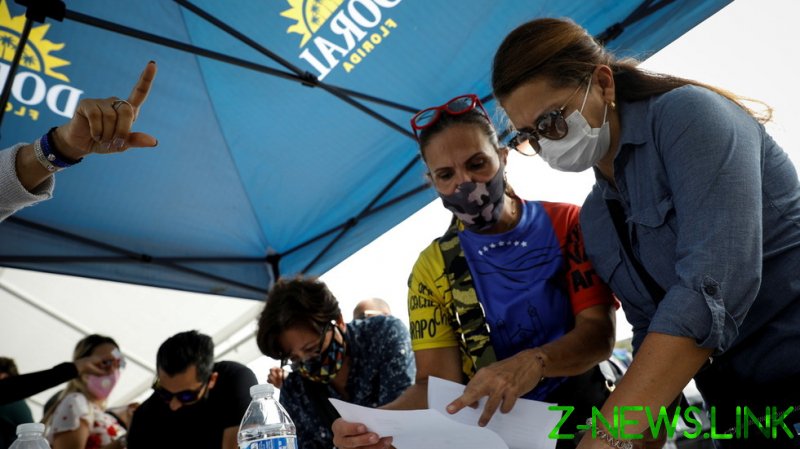 The so-called “popular consultations” organized by the supporters of the self-styled “interim president” started online on Monday and concluded with an in-person participation on Saturday. The move was held after an official election held earlier this month handed control over the Venezuelan National Assembly to President Nicolas Maduro’s Socialist PSUV party.

As it was during the 2018 presidential elections that handed victory to Maduro himself, most of the opposition boycotted the official vote. After losing what was considered its last institutional stronghold, Guaido’s supporters decided to demonstrate the scale of the alleged popular rejection of the Venezuelan government they continue to call illegitimate.

Although the turnout for the official election was not particularly high, Guaido’s initiative has hardly faired any better since, according to the organizers’ own estimates cited by Reuters, just under 6.5 million out of roughly 17.5 million eligible voters took part in the “consultation,” including some 845,000 people living abroad.

The outcome of the “consultation” did not seem to affect the political situation in the Latin American nation hit by strict US sanctions targeting its oil sector and exacerbating a prolonged economic crisis. Maduro himself brushed off the opposition’s initiative by saying that “no internet consultation has constitutional status” or any “legal value.”

In 11 out of 24 Venezuela’s states, the law enforcement sought to disrupt the in-person participation in the “consultation” by removing the informal voting sites, the organizers complained. Still, they themselves ended up destroying all the traces of the “consultation”, at least at some of the improvised polling stations.

A video published on the social media shows a pile of ballots and voting records burning on the floor at one of such sites in the northern Miranda state. The organizers claimed they did so to protect the identities of the participants.

“There will be no trace of participation today, you can rest assured. All the records and ballots will be destroyed immediately [after the voting count] is concluded,” a self-styled polling commission member, Emilio Grateron, told a press conference after the event.

After declaring himself ‘interim president’ early last year, Guaido immediately received support from the US and its allies. Yet, his efforts to take power in Caracas, including through an attempted coup, ended up in naught since he failed to win support of the Venezuelan military and other key elements of society.

Guaido also appears to gradually lose clout even over the fellow opposition members. Earlier in December, another opposition politician, Henrique Capriles, urged the incoming US administration to ditch its support for the self-proclaimed “interim president” while lamenting the fact that Venezuelan opposition lacks a real leader.