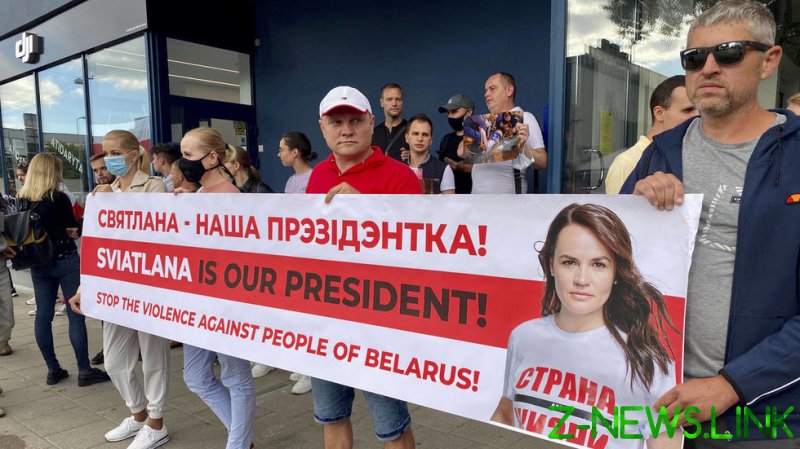 In the resolution, titled “On the Illegitimate Union Imposed by Russia on Belarus” and adopted on Thursday, the Lithuanian parliament threw its weight behind the presidential election’s official runner-up, deeming her and the Belarusian opposition’s Coordination Council “the only legitimate representatives of the Belarusian people.”

The resolution refers to Tikhanovskaya as the “elected leader” of the country, while Belarusian President Alexander Lukashenko is called “an illegitimate leader.”

The document takes aim at relations between Minsk and Moscow in particular, preemptively labeling all future integration agreements between the two neighbors as “null and void” and a “de facto annexation” so long as Lukashenko signs them.

The MPs also proposed slapping sanctions on Russian officials and Lukashenko if they attempt to ink such agreements, which the deputies argued “are made to limit the sovereignty of the country by illegal means against the will of the Belarusian people.”

The move comes amid speculation in Western media that an upcoming meeting between Lukashenko and Russian President Vladimir Putin may pave the way for the unification of the two countries. Those claims were dismissed by the Kremlin earlier this week. Putin’s press secretary, Dmitry Peskov, called the rumor “absolute nonsense,” saying that “no mergers” or “acquisitions” would take place during the visit.

Although the EU refused to accept the outcome of the Belarusian election, which the opposition argued was rigged in favor of the long-standing incumbent, Lithuania is the first country to officially recognize Tikhanovskaya as an “elected leader,” immediately prompting comparisons to the US decision to recognize Venezuelan opposition leader Juan Guaido as the country’s interim president in January 2019.

Washington’s lead was soon followed by its allies in the region, with more than 50 countries ultimately joining the US in recognizing Guaido as Venezuela’s “acting president.” But despite unequivocal support from the US and its allies in Latin America, Guaido has lost much of his initial momentum since a failed military coup in April of last year.

It’s unclear, however, if Lithuania’s gambit will spark a chain of similar events. So far, the European Union, although threatening sanctions on high-profile Belarusian officials, seems to be leaving the door open for Lukashenko to remain in office.

Germany’s Die Welt newspaper reported last week that Berlin, as well as Paris and Rome, have opposed blacklisting Lukashenko and have united to overrule proposals by the Baltic states and Warsaw to sanction the Belarusian leader.

Mass protests that swept across Belarus in the wake of the presidential election last month continue to grip the country. In an interview with Russian media on Tuesday, it appeared that Lukashenko hinted he might leave office after changes are made to the constitution, while ruling out the possibility he would vacate the post under pressure from “the streets.”