Home / WORLD / Venezuela accuses US military aircraft of violating its airspace from Colombia, warns it might ‘respond forcefully’ 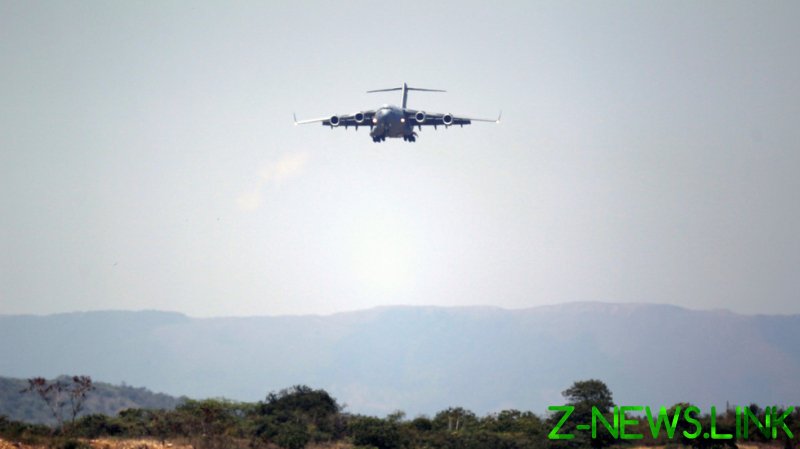 A C-17 military transport aircraft belonging to the US Air Force flew into Venezuela’s Zulia state, which borders Colombia, on Thursday evening, its Minister of Defense Vladimir Padrino Lopez said in a statement. The plane allegedly flew on this course for some 14 nautical miles (26 kilometers), the ministry said. It added that US planes had allegedly crossed into the country on 21 occasions this year, calling it a “serious violation of international aeronautical standards.”

Washington has not immediately commented, according to Reuters.

The “flagrant provocation” happened as part of joint military drills in Colombia in which American fighter jets are participating, Venezuela said. “Reconnaissance tasks are being carried out towards the Venezuelan geographical area,” it alleged, condemning the US military presence in Colombia, which, it said, “significantly affects stability” in the whole South American and Caribbean region.

President Nicolas Maduro “has issued precise orders to remain alert and respond forcefully to any act of aggression,” the statement said.

This month, Venezuela reported a full-scale military operation in the capital, with government troops fighting a major criminal organization. During the operation, authorities seized a large arsenal of weapons, claiming these were of Colombian and American origin. They have also identified some of the gang’s arrested members as right-wing Colombian paramilitaries and accused Bogota and its partners in Washington of attempting to destabilize the situation in Caracas and to instigate violence.

The US doesn’t recognize President Nicolas Maduro as the legitimate leader and has been involved in a years-long effort to topple the Venezuelan socialist government through economic sanctions and other measures. Washington, along with the majority of European and South American nations consider opposition politician Juan Guaido to be the legitimate leader, following a 2018 presidential election, however, his numerous attempts to install himself in Caracas have so far failed. Nations like China, Russia, Iran, and Turkey continue to consider Maduro to be president of the country.