Home / WORLD / ‘Vaxxed or masked’ Biden tells Americans, but gets rejected as negligent or DICTATOR by both Democrats & Republicans

‘Vaxxed or masked’ Biden tells Americans, but gets rejected as negligent or DICTATOR by both Democrats & Republicans 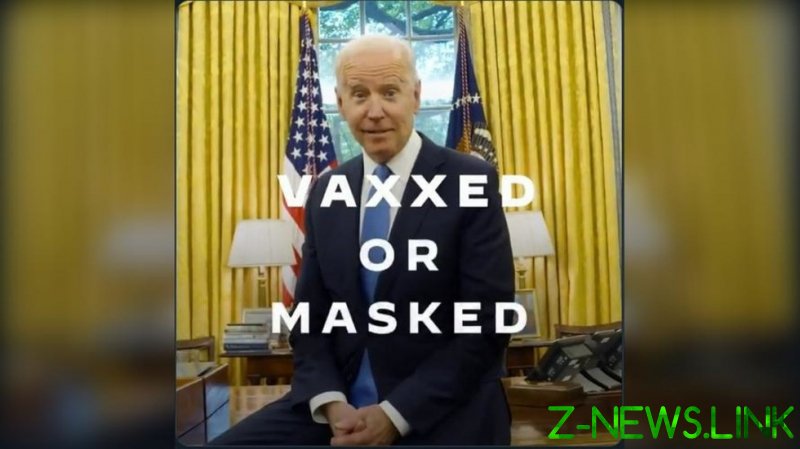 “The rule is now simple: get vaccinated or wear a mask until you do. The choice is yours,” the official presidential account tweeted on Thursday afternoon. It was followed up by a video of Biden in the Oval Office – his face uncovered, for once – saying “vaxxed or masked.”

This followed Thursday’s announcement by the Centers for Disease Control and Prevention (CDC) that fully vaccinated people could ditch the masks both outdoors and indoors in most places. Masks remain mandatory on buses, trains and planes, thanks to a Biden executive order extended through September.

The sudden about-face from the mask zealot – Biden wore a mask on Zoom calls with foreign leaders and insisted on wearing it outside even after being fully vaccinated for months – left many people who listened to him and the corporate media narrative on the virus with a bad case of virtual whiplash.

“This is negligent. Vaccination does not completely discount from the spread. As well as this, it does not include protections for the vulnerable at this time. Masks should be at the very least encouraged for everyone after full vaccination,” said one person responding to the president on Twitter.

“I’m keeping my mask on until the mask requirement is lifted entirely. I don’t want to be mistaken for a Trump supporter,” tweeted another.

“This is your worst mistake since becoming President. We aren’t that far along yet. Immuno-compromised people are still at extreme risk. Masks aren’t 100% effective but when both parties wear masks they are nearly so. And – guess what? – People lie. Especially the unvaxxed GOP,” wrote someone with “had his shots and still wears a mask” in his Twitter name.

Meanwhile, “Republicans Against Trump” – with 174,000 followers – wondered what they were going to do with all the Biden-Harris masks they had commissioned.

Others were likewise unconvinced. Ian Smith, one of the owners of the Atilis Gym in Bellmawr, New Jersey – persecuted by the state for refusing to lock down his business – commented that “This gonna turn into ‘Let me see your papers please’ real fast.”

“Had Trump tweeted anything like this… the left would be calling it a terrorist threat, or something along those lines,” tweeted Brazilian MMA fighter Vinny Magalhaes. “Supreme Leader [Joe Biden] here tweets this, sounding straight up like a Chinese dictator, and the left won’t say anything… Actually, they will support it.”

“You can’t even climb stairs, how are you going to make us wear masks forever?” tweeted the Libertarian Party of Michigan, referring to Biden’s infamous Air Force One stumble.

Others simply posted memes whose message was hard to miss.

Biden and the Democrats embraced mask-wearing as a cause in mid-2020, as a way to differentiate themselves from President Donald Trump – who had refused to cover his face in public, arguing it would show weakness.

One of Biden’s first orders upon getting sworn in was to impose a 100-day mask mandate as a show of “patriotism,” only to later get criticized by Republicans for discouraging vaccination by continuing to insist on masks.