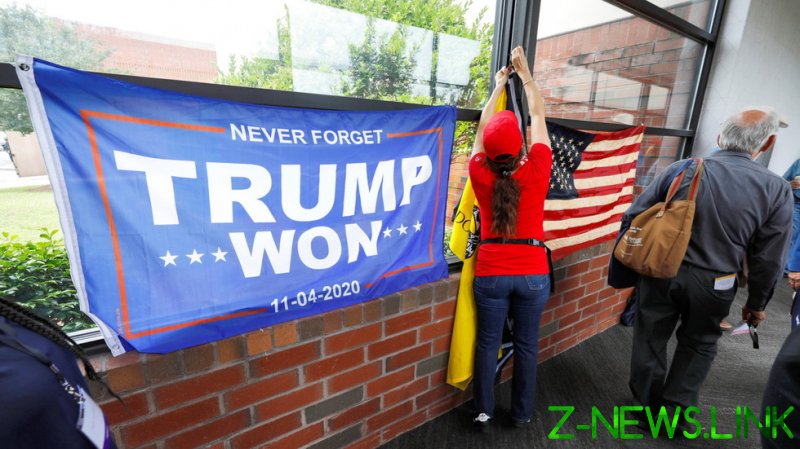 The latest Yahoo News/YouGov poll, released on Wednesday, showed that 66% of Republicans believe last November’s election was “stolen” from former President Donald Trump. Just 18% said they consider Biden’s victory to be “fair and square,” and approximately 16% were undecided.

While only 3% of Democrat respondents believe Trump was robbed, 28% of independents agree that the Republican was the rightful winner, the survey showed. Overall, 29% of participants said the election was rigged.

The results were little changed from other polls done this year, Yahoo acknowledged. The rate of respondents saying Biden’s victory was illegitimate has ranged from 27% to 29% in similar surveys that have been done since January. Only 18% of Trump voters in a CBS News/YouGov poll done last December said Biden was the legitimate winner, the same percentage as in the new survey.

The unchanging election views reflect intractable political divisions in the US, and apparently show the diminished ability of mainstream media outlets to influence public opinion, with Yahoo reiterating on Wednesday that Trump’s fraud claims were “false,” “unsubstantiated” and “debunked.”

But even with a significant portion of Americans – including nearly three in 10 independents – convinced that Biden isn’t the rightful president, Democrats haven’t tried to allay those concerns by launching a congressional investigation or supporting electoral reforms. In fact, Biden has called similar efforts in Republican-controlled states “the most dangerous threat to voting in the integrity of free and fair elections in our history.”

Instead, the Democrat-controlled Congress has focused its investigative powers on the January 6 Capitol riot, which party leaders have billed as a racially-motivated deadly “insurrection” incited by Trump. But that, too, has done little to influence public opinion.

Although the latest poll was conducted in the week following the first hearing by the US House committee investigating the riot, results hardly budged from past surveys about the incident. About 69% of respondents said the Capitol breach wasn’t justified, which was in line with the 65-71% range of past polls. Some 48% blamed Trump supporters for the violence that day, unchanged from previous surveys, and nearly that many said that the former president himself caused the riot.

As with most every topic, views differed sharply along party lines. Some 81% of Democrats and just 9% of Republicans believe Trump is to blame for the riot. While 62% of Trump supporters said there has already been enough scrutiny of the event, some 83% of Biden voters said more investigation is needed to “find out the truth of what happened” on January 6.