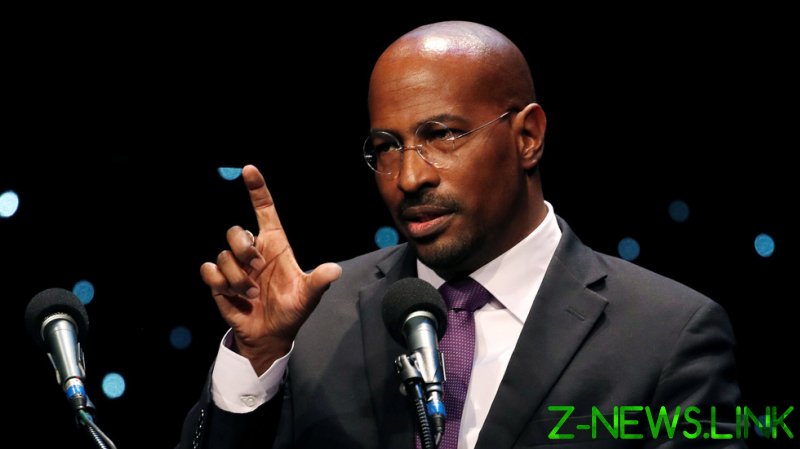 Appearing on ‘The View’ to chat about a documentary produced in cooperation with co-host Meghan McCain, Jones was confronted over his working with the Trump Administration on criminal justice reform.

“Now Van, you do spend a lot of time threading the middle and trying to unite people,” co-host Sunny Hostin said. “But there are those who accuse you of being a political opportunist–a chameleon, so to speak–who provided racial cover for former, disgraced, twice-impeached President Trump.”

Mentioning the fact that Jones had cried on air after Biden’s presidential victory and praised the return of “character” and “truth,” Hostin suggested “people in the black community don’t trust you anymore.”

Slamming the accusation as “not true,” Jones fired back at Hostin.

“Who among my critics have been able to get people together to help folks at the bottom? When we fight like this about everything and you can’t give anybody even a little bit of credit for anything, who it hurts is not the politicians, it’s not the pundits, it’s regular folks who don’t have anything,” he said.

Jones later warned Democrats against “throwing away” the millions of people who’d voted for Trump.

Jones’ words fell on deaf ears and the fact that the very documentary he was there to promote was about “unity” seemed to be irrelevant.

“You’ve lost a lot of people who trusted you and who saw you as a voice because of the positions you took during Trump,” co-host Ana Navarro said, noting not only Jones’ work with the Trump administration, but him being in pictures with conservatives like Candace Owens.

Defiant, Jones said he’s “proud” of the reform he worked on with the Trump administration and has “no regrets.”

Jones was eventually cut off, with co-host Joy Behar telling him to “take a nap.”

Liberals have celebrated the verbal beating Jones took, while conservatives, including Owens herself, called the segment “utterly psychotic.”

“To add context. Van Jones and I smiled together in a picture at a bi-partisan event attended by both Republicans and Democrats for the First Step Act–prison reform,” she explained in another tweet, referencing Navarro being triggered by a photo of Owens with Jones.

Many of the clips shared on Twitter have also cut out Jones’ response to Hostin, instead focusing on her accusations.