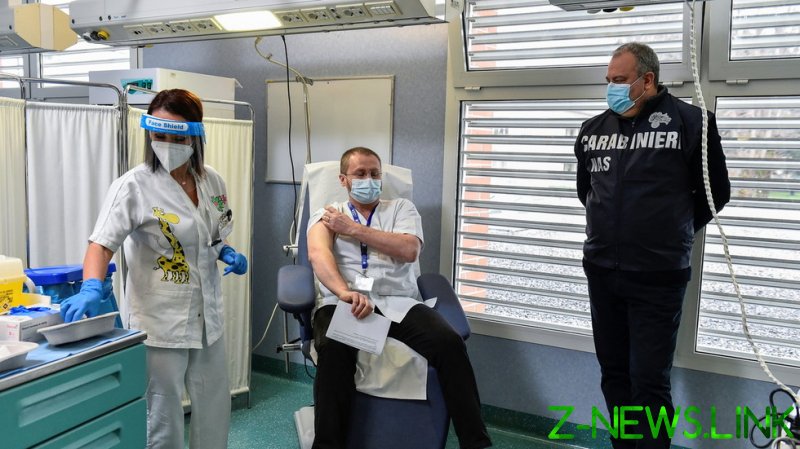 The beginning of the vaccination program, scheduled for December 27, 28 and 29, is “a touching moment of unity,” EU Commission President von der Leyen said in an address published on Saturday, a day ahead of the rollout. She said that the vaccine had been delivered to all EU nations and described the jab as being “the lasting way out” of the pandemic crisis.

The EU’s plans for a coordinated rollout were, however, somewhat ruined by Germany, Hungary and Slovakia after they decided not to wait for their fellow EU members and launched vaccination campaigns in their countries almost as soon as the shipments were delivered.

“Every day that we wait is one day too many,” Tobias Krueger, an operator of a nursing home in the German town of Halberstadt, told AP. The care home, which saw 40 of its 59 residents and 10 out of some 40 employees vaccinated, was among the first in Germany to receive the jab.

Hungary, after receiving its vaccine shipment early on Saturday, sent it to four hospitals, including two in the capital, Budapest, giving priority to healthcare workers.Most European nations that have seen tens or even hundreds of thousands of infections throughout the pandemic faced the tough choice of deciding who to vaccinate first.

The initial Pfizer and BioNTech vaccine shipments delivered across the bloc in super-cold containers from a manufacturing center in Belgium contained only about 10,000 doses per country. With every person needing to get two jabs to be fully vaccinated, the initial shipment will only protect about 5,000 people in every member state.

A really massive vaccination program is expected to start across the EU no sooner than January. Most nations decided to prioritize either the most vulnerable groups or healthcare workers. France, Germany and Spain announced they would administer the vaccine to the elderly, while Italy and Poland started with healthcare personnel.

The vaccination launch comes just two days after the number of coronavirus cases in Europe surpassed 25 million, according to AFP’s tally. Europe is now the world’s most affected region, outranking the US and Canada, which come second. In mid-December, Europe also became the first region to reach a total of 500,000 virus-linked deaths.

A new Covid-19 strain that originated in the UK and is believed to be more contagious than the original one also appears to be spreading across Europe and beyond. Despite more than 50 nations, including most of the EU, banning all travel to and from the UK, the new strain has already been discovered in Australia, Denmark, Germany, Italy, Israel, the Netherlands and, most recently, Spain and France.

The EU-wide vaccination also comes weeks after Russia rolled out its own large-scale inoculation campaign on December 5. On December 10, Alexander Gintsburg, the head of the Gamaleya Institute, which developed Russia’s pioneering Sputnik V vaccine, said more than 150,000 Russians had got the jab. On Monday, he said 350,000 Sputnik V doses are ready for use and another 150,000 are expected to get the national regulator’s approval this week.