Home / WORLD / Vaccine producers could have funded jabs for all of Africa, instead shareholder payouts & sluggish ‘charity’ efforts are priority

Vaccine producers could have funded jabs for all of Africa, instead shareholder payouts & sluggish ‘charity’ efforts are priority 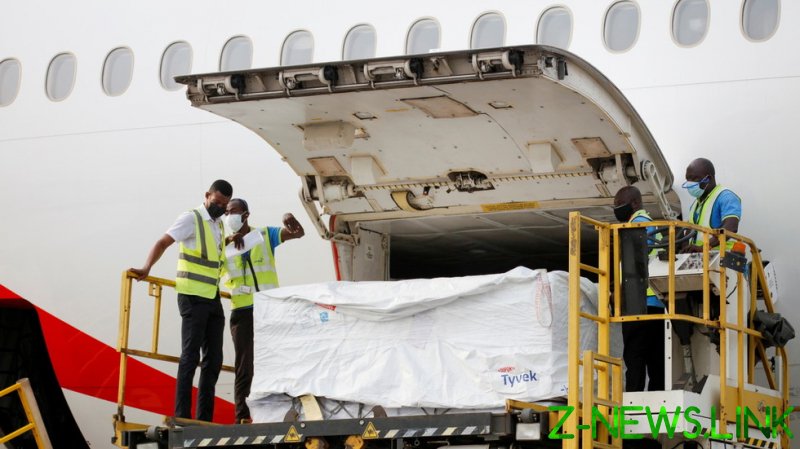 Pfizer, Johnson & Johnson, and AstraZeneca, the three top producers of Covid-19 vaccines, could fund the vaccination of the entire continent of Africa, some 1.3 billion people, vaccine advocacy group the People’s Vaccine Alliance revealed on Thursday.

Or rather, they could have funded all those jabs if they hadn’t spent that money to pay out $26 billion in stock buybacks and dividends to their shareholders. The vaccines have largely been sold to wealthy countries, netting Pfizer/BioNTech and fellow mRNA vaccine producer Moderna a whopping $33.5 billion, and many of the recipient countries bought so many extra shots that their citizens are – in the case of Canada, at least – expected to be covered as many as five or more times over.

Many of the frontrunner companies promised to pick up the cost of vaccinating less wealthy nations in the early days of the vaccine research, a promise which helped secure funding from governments and charitable initiatives. However, touting their unusually charitable behavior in the early days of vaccine purchasing and development has largely evaporated now that the moneyed West has its supplies locked down and third world countries are finally able to get in line for theirs. Pfizer and its colleagues are starting to talk about upping their prices again – “once we get beyond the pandemic environment,” in the words of chairman Albert Bourla.

Given that infection and death rates for Covid-19 in Africa never reached the level of a “global disaster,” early on in the epidemic, it seems they’re plotting to gouge the entire continent for a medicine it doesn’t need nearly as badly as other countries, except in the eyes of the WHO. Given the continent’s familiarity with less expensive drugs like chloroquine – a familiar and comparatively safe remedy for malaria – many doctors had already been using that off-patent formulation rather than twiddling their thumbs and watching patients die for months awaiting the arrival of the much-lauded Western miracle vaccine.

With vaccine passports now looming in the future, however, many Africans face the steep prices of not just second or third “booster” shots but the initial shots themselves – all sold at full price. For countries dealing with a full plate of equally if not more deadly diseases, being told their inhabitants can’t travel without getting a jab for Covid-19 comes off as wildly unfair.

To make matters worse, the US and members of the EU have already banded together to block a legal loophole that would have allowed an exception to a World Trade Organization rule permitting pharma companies – their much-sought-after products funded in large part by government cash – to share their vaccine formulas with generic drugmakers. This measure would allow impoverished nations to quickly and cheaply inoculate their residents, treasured vaccine recipes in hand, but it would take some of the profits out of Pfizer and its friends’ pockets – and thus must not be permitted, in the eyes of the Western nations these companies call home.

The measure has been blocked at least three times at three separate meetings, even though 100 of the WTO’s 164 member countries favor the proposal. Unsurprisingly, one of the blockers-in-chief is the US’ trade rep, who insisted protecting intellectual property rights and “facilitating incentives for innovation and competition” was the only way to ensure continued speedy development of lifesaving drugs, a notion supported by the UK and EU – all of which are sitting pretty atop plentiful vaccine stockpiles for their own citizens.

The WTO will meet informally in Geneva on Thursday to once again discuss opening the loophole that would allow less wealthy countries to make use of the patented formulas, and its next formal gathering is set for May 5.

Meanwhile, the COVAX program, a vaccine-sharing scheme that intends to bulk-purchase jabs from wealthier countries with the help of charitable dollars and send them to poorer countries around the world, specifically targeting healthcare workers and other vulnerable demographics, is running far behind its target, having delivered just one in five of the Oxford/AstraZeneca shots it had hoped to have distributed by May, the Guardian reported on Thursday.

The program was initially championed last year by the World Economic Forum as an ambitious effort to vaccinate the world, supposedly involving “nearly two-thirds of the total population” – a reality which has not panned out.

While some countries, including smaller nations like Tuvalu, Nauru, and Dominica, have received their full supply of jabs under the COVAX program, others, like Bangladesh, Pakistan, and Myanmar, have not received a single dose of those promised.

With Western-favored vaccines like Pfizer having donated a relatively tiny number of doses at a not-for-profit rate to the COVAX program and Moderna not having even donated one dose, it’s clear which companies are placing profits over people, no matter what charitable impulses their words indicate.

Overall, the program has delivered just 21.5% of doses scheduled by the end of May. It is funded by Gavi, one of Microsoft founder Bill Gates’ many vaccine-related charitable organizations, and UNICEF.