Vaccine passport hypocrisy: How the UK is copying China while still criticising Beijing on human rights 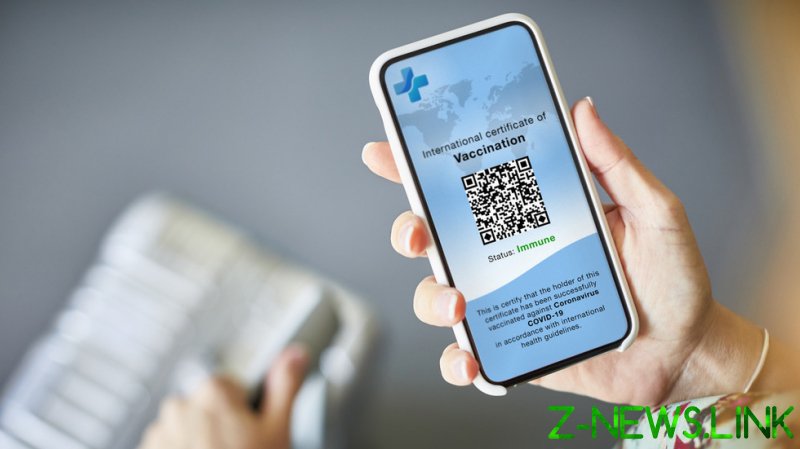 Demonise China, while copying the worst aspects of it. That, in a nutshell, is what the Western power elites have been doing these past 18 months – under the guise of fighting a virus.

‘China’s Covid-19 QR Code surveillance state’, that was the title of an informative article published by The Financial Time in early May 2020. “Local authorities across China have rolled out health code systems, accessed through smart phone applications, to control the movement of people and identify those who had been diagnosed with the virus or visited high areas of infection. Sometimes it feels like every transaction – even entering a park – is subject to government approval,” author Don Weinland wrote.

In March 2021, in an article entitled ‘The new codes governing everyday life in China’, the AFP reported from Beijing, “It’s a ritual that has become hard to avoid in China – scanning a code with your mobile and proving your health credentials via an app, giving you the green light to go. Or not.” The article went on, “Entering residential buildings, businesses or a park, taking a plane, train or taxi, or simply trying to get home, you are well advised to make sure your phone battery is charged.”

Sounds pretty dreadful, no? But look what’s happening across the Western world today.

In France, the ‘pass sanitaire’ – which uses QR codes scanned by a smartphone to show that someone has been vaccinated – has been in force since August. It is now obligatory to present a ‘pass sanitaire’ to gain access to cafes, restaurants, health centres, libraries, department stores, long-distance trains and a whole host of public places. Beijing and Paris. Spot the difference? Apart from the Eiffel Tower there isn’t one. Ditto Cyprus and China. Israel and China. Ireland and China. New York and China.

Meanwhile, in England and Scotland we’re told that jab-only vaccine passports – again using a smartphone app – will be introduced at the end of the month to restrict access to nightclubs and ‘large events’. That’s despite us knowing that being vaccinated doesn’t prevent someone getting ill with Covid or transmitting the virus. Vaccine passports are clearly not so much about public health, but public control. It could not be more blatant.

The great fear is that once mandated, these ‘passports’ will be extended to other venues, as in France, and won’t be temporary – no one is mentioning an end date – and will morph into China’s social credit system.

Prior to 2020, the notion that the West would copy Beijing in going down this road of digital control, and restricted access based on QR codes, would have been met with outrage – “We are the West. We stand for freedom!”

But the very same people who would have said this in 2019 are not only downplaying what vaccine passports represent in terms of loss of freedom and establishing a new, transactional relationship between the citizen and the state, but are actively promoting them as a ‘good’ thing.

UK Foreign Secretary Dominic Raab has been fierce in his criticism of China – in February he accused Beijing of “industrial scale” human rights abuses. Yet the same Dominic Raab also said in February that vaccine passports for shops and restaurants in England could happen.

If you look across the UK establishment, including the media, it’s the same picture. Hyperventilating on China’s ‘appalling human rights record’ while ordering a ‘Chinese takeaway’ by supporting restricting access to daily life for those ‘undesirables’ – aka the ‘unvaxxed’ or ‘anti-vaxxers’ – without the right app or QR code.

Sinophobia and Sinophilia. At the same time. In the same people. How do we explain this cognitive dissonance? What the Western elites and their media stenographers want to do is to copy the Chinese system domestically – or at least the QR code/digital ID part of it (they certainly don’t want the death penalty for corruption and ‘economic crimes’) – while being opposed to Beijing’s role in international affairs.

Its growing influence in Africa, its friendship with Russia and its strategic partnership with Iran… These all explain why the elites want to turn their own countries into copies of China – with the aim being a digital ID social credit system which would massively increase control over citizens and bar ‘dissidents’ from public life – while grandstanding over Beijing and exuding 19th century-style moral superiority over it at every opportunity.

It’s not hard to notice that the more the West turns into China, the more the anti-Chinese rhetoric increases. Hypocrisy? It really is off the scale.