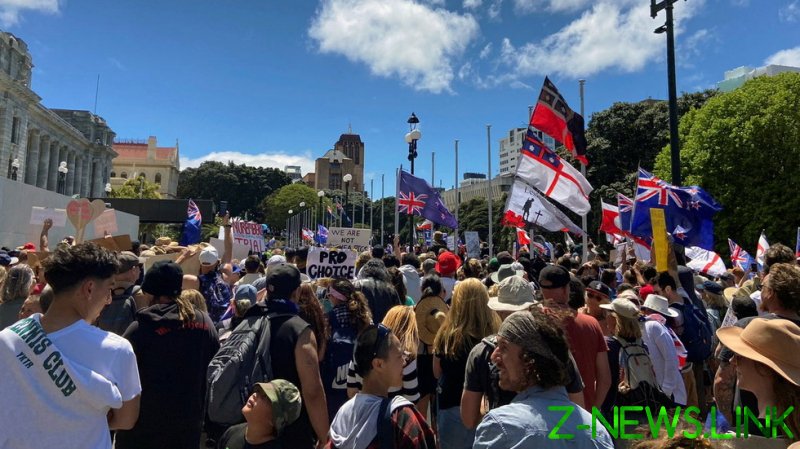 Some 3,000 people showed up in Wellington early on Tuesday to protest the government’s Covid-19 policies, local media reported, with the crowd starting its march from the capital’s Te Ngakau Civic Square before heading north to the Parliament building, commonly known as the Beehive for its shape.

The size of the demonstration was captured in videos circulating on social media, showing a sea of protesters, many hoisting signs and shouting slogans such as “Freedom” and “Kiwis are not lab rats,” denouncing vaccine mandates and lockdowns.

Speakers also addressed the crowd through a PA system at certain points, one heard stating “We have come here today on the grounds of parliament to say enough is enough,” apparently in reference to the country’s pandemic policies.

Speaker of the House Trevor Mallard said the massive demonstration in Wellington prompted the largest security response at parliament since he was first elected in 1984, while Prime Minister Jacinda Ardern stated the action “was not representative of the vast bulk of New Zealanders.”

A couple dozen protesters were also spotted in New Plymouth, some 350 kilometers (217 miles) north of Wellington, according to Stuff, while the Guardian, citing police, reported that another 50 demonstrators showed up at the outskirts of Auckland and held up traffic for an hour. The city, a major metropolis also far to the north of Wellington, has been under a tight lockdown for around two months, including travel restrictions in and out of the area.

An officer was “bitten by an as yet unidentified protester” as law enforcement halted the demonstration in Auckland, local police said in a statement, adding “the actions of protesters required our staff to physically intervene to move them off the road” and that such protests pose “unnecessary risk to our staff who are simply trying do their part in preventing the spread of Covid-19.”

A photographer for Stuff covering the action in Wellington was also “grabbed and pushed by protesters who yelled anti-media abuse at him,” the outlet said. It is unclear if any arrests were made at any of Tuesday’s demonstrations.

The protests follow the announcement of vaccine mandates late last month which are likely to affect some 40% of New Zealand’s workforce, expanded from a previous 15% in a plan to end a cycle of lockdowns and get 90% of the population inoculated. Prime Minister Ardern defended the new requirements, saying they would “play a big part in helping to minimize the spread of the virus in the highest-risk venues by reducing the potential for Covid to enter the business in the first place.” Also part of the plan, the government has required anyone visiting certain high-traffic businesses to present vaccine passports to prove they’ve been immunized, another hotly contested measure.

The island nation of just over 5 million has had among the lowest Covid-19 infections in the world, with around 8,000 cases and just 32 deaths since the pandemic kicked off late last year. Around 67% of its population has been fully vaccinated, according to data collected by Johns Hopkins University.