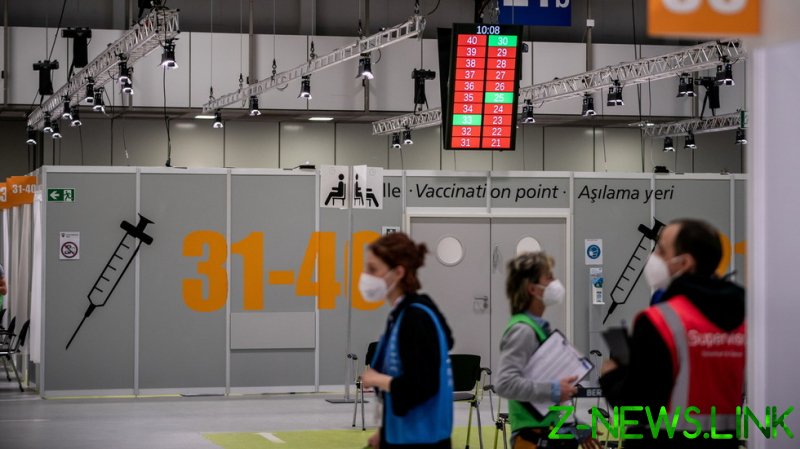 “Vaccination does not prevent the third wave, the third wave is growing,” the minister said as he visited one of the vaccination centers in Berlin on Monday, following the Easter holidays. Spahn also described the situation in Germany’s intensive care units as “worrying” and said that the number of people treated there increased to more than 4,000 over the Easter weekend. More than half of them are on invasive ventilation.

Spahn then called on Germany to “break this third wave together” by limiting contacts once again. The minister said that contacts should be primarily restricted “in the private sector, in schools, at work wherever possible.” He also pointed to the UK, Chile and the US as he said that even the nations with a higher vaccination ratio still resort to contact restrictions when necessary.

Amid the vaccine shortages and delivery delays, Germany managed to administer the first dose of a Covid-19 vaccine to some 10 percent of its population in the first quarter of this year. Spahn expects this figure to double by the end of April. “We will now be able to do the next ten percent in a month,” he said.

Earlier, the German Standing Vaccination Commission (STIKO) recommended limiting the use of the British Oxford-AstraZeneca vaccine to those over 60 years old due to the jab’s potential serious side effects in younger people, such as blood clots in the brain.

Meanwhile, Spahn called on the German states to fight the third wave with lockdowns. Those regions that would see their average seven-day infection rate going over 100 should use the so-called “emergency brake” and re-introduce some restrictions, he said.

The minister also championed a more relaxed approach to those who had already been vaccinated. Such people should be treated the same as those who tested negative for Covid-19, he argued. However, they should still follow the safe distance rules as well as wear protective masks in public, he added.

The health minister’s concerns were shared by a Social Democratic health expert, Karl Lauterbach, who even advocated a new vaccination strategy that would focus on administering the first dose to as many people as possible at the expense of the second one.

If an interval between the first and the second dose of such vaccines as Pfzier or Moderna is increased from six to twelve weeks, more than 60 million people in a nation of some 83 million could get the first dose by July, he told the Augsburger Allgemeine newspaper.

The idea was supported by Carsten Watzl, Secretary General of the German Society for Immunology, who said that the German authorities should be “pragmatic” and use every dose they have instead of reserving some of them for the second shots. Yet, he also admitted that the level of protection for those who would receive the first dose could decrease between the sixth and the twelfth weeks.

Spahn’s somewhat alarmist projections were, however, criticized by the head of Berlin’s IGES Health Research Institute, Bertram Haeussler. A medical statistician, Haeussler told Die Welt newspaper earlier this week that Germany is not seeing a nationwide Covid-19 third wave but rather several infection clusters mostly located near the border with the Czech Republic and Poland as well as around large meat factories.

“The problems of the current wave are the same as those of the first and the second ones,” he said. “If there are such high incidences in these border regions that they significantly raise the national average [infection rate], then the lockdown in all of Germany does not look like a particularly clever [decision].”

When the models predicting the third wave show exponential growth, “it always sounds as if it was exclusively the work of the creepy mutant B.117; as if mankind is defenseless,” Haeussler said, referring to the British Covid-19 variant deemed more contagious.

“Yet, all I see are regional clusters and hotspots; counties that have not managed to get their problems under control since the beginning of the pandemic,” the statistician said, calling on the government to develop a “tailor-made” approach focused on the meat factories as well as workers and truck drivers coming from Eastern Europe instead of just forcing regions into lockdowns.