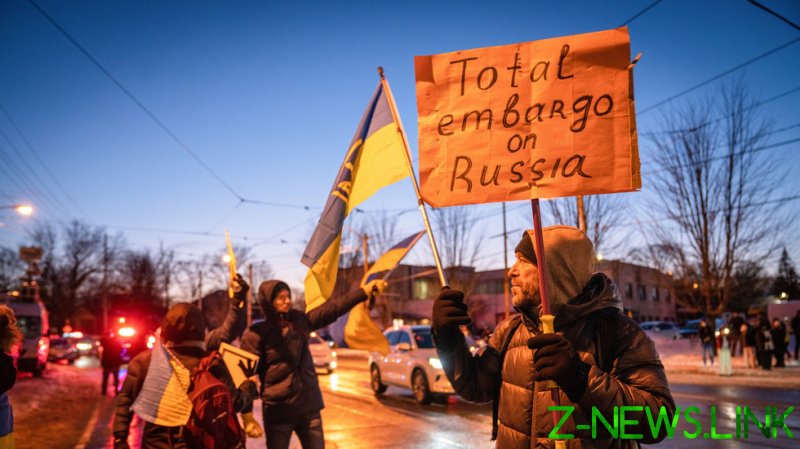 A survey conducted by polling firm EKOS shows that Canadians who have received “three or more doses” of a Covid-19 vaccine tended to express significantly more support for aggressive anti-Russian measures with regard to the ongoing military conflict in Ukraine.

The poll was conducted between March 9 and 13, and collected responses from a random sample of 1,035 Canadians.

Overwhelmingly, more than 80% of the vaccinated respondents supported expanding sanctions, seizing assets of Russian nationals associated with President Vladimir Putin, cutting off shipments of Russian oil, and sending military equipment to Ukraine. Over half of the group agreed with the idea of sending military jets to the Ukrainian Army, and 30% thought Canada should dispatch its own military forces to Ukraine.

Furthermore, 82% of vaccinated respondents felt that Canada should impose tougher sanctions on Russia even if it means they would have to suffer higher prices and slower economic growth at home.

On the other hand, respondents who said they were unvaccinated seem to have differing opinions, with the majority (52%) saying they don’t support any of the anti-Russian measures mentioned by the pollsters, and 75% saying they refuse to pay the price by having prices at home skyrocket. 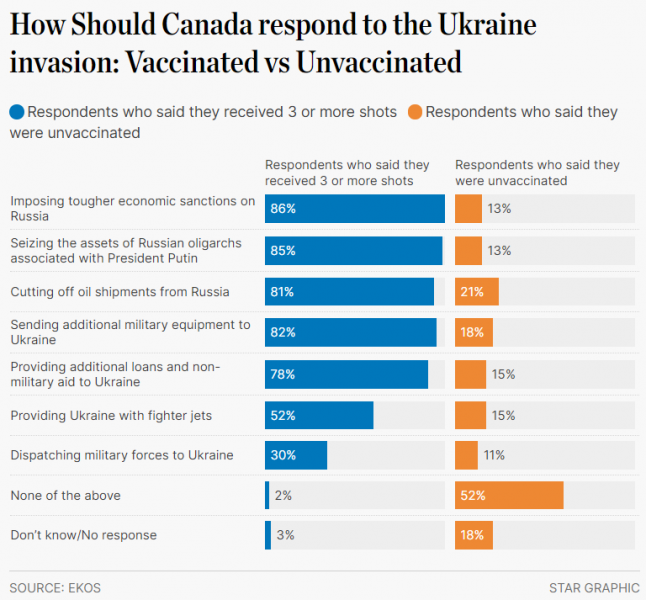 The poll also revealed how the two groups feel about the reasons for the conflict, with 88% of vaccinated respondents saying the repression of Russian speakers in the Donbass region does not justify Russia’s actions in Ukraine. The unvaccinated, however, are more split on the question, with 26% saying Russia’s military operation is justified, 27% saying it isn’t, and 35% saying they neither agree nor disagree with it.

The vaccinated also say, almost unanimously (88%), that Russia is guilty of war crimes in Ukraine, while only 32% of unvaxxed respondents agree, and 42% say they don’t believe it is happening at all.

EKOS President Frank Graves said he found the poll results alarming, suggesting that vaccine refusers were “much more sympathetic to Russia,” and that it showcased the “highly corrosive influences of disinformation.”

“This is definitely a new and bluntly insidious force that’s contributing to polarization and disinformation and poor decision-making. And it doesn’t seem to be going away. Things are getting worse,” Graves said, as reported by the Toronto Star.

“I don’t think this is because those people had an ingrained sympathy to the Russians. They’re reading this online, they’re consuming this from the same sources that were giving them the anti-vax stuff.”

Meanwhile, others have interpreted the poll results as a prime example of how quickly mainstream media narratives can change and how easily the masses transfer zealous support from one topic to another according to the crisis of the day.