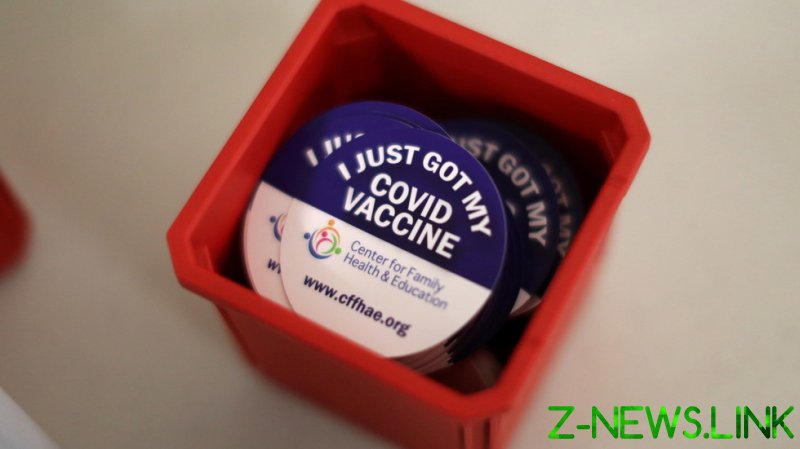 The city of Montclair, located in California’s Pomona Valley, has decreed that starting next week, employees who want to work without a mask will have to wear a sticker showing they’ve had a Covid shot.

According to City Manager Edward Starr, the policy is designed to ensure that Montclair is in compliance with a June directive issued by California’s workplace safety board, which instructs all vaccinated workers in the state to submit evidence or sign a pledge they have been vaccinated if they choose to abstain from wearing a face mask.

In response to recommendations from the Centers for Disease Control and Prevention, California issued new guidance in April stating that fully vaccinated individuals could forgo masks in most settings.

The city official claimed that California’s Department of Public Health was encouraging the use of stickers on employee ID badges “to demonstrate they have been fully vaccinated.” He dismissed the notion that the labels could be seen as potentially problematic, and stressed that the policy would help the city to fulfill state and federal guidelines.

Starr also pointed to the fact that the CDC offers a selection of printable stickers that workplaces can provide to employees who get vaccinated. However, it doesn’t appear that the public health authority has issued guidance recommending stickers be used as forms of identification.

But the reasons given for the new measure didn’t persuade city councilman Ben Lopez, who argued the policy was a violation of employee privacy and warned it could result in Montclair getting dragged to court.

“This policy is being rushed through and rammed down the throats of our employees with no legal counsel being sought and no discussion from our City Council,” Lopez said during a council meeting earlier this week. “I think we are on shaky legal ground.”

The councilman expressed concern that the stickers could make employees “uncomfortable” around one another and that they may even create a “level of ostracism” in the workplace.

Starr pushed back against the criticism by claiming that a “number of complaints” about the city’s approach to certifying vaccination status had already been filed with state authorities. But Lopez openly challenged this allegation, noting that he hadn’t heard of a single case in which a city employee had objected to how Montclair deals with such matters.

The councilman further claimed that several city workers had told him that they oppose the new sticker policy. In an interview with local media, Lopez said that he supported keeping Montclair’s former policy, whereby city employees submitted paperwork documenting their vaccination status. Those unable or unwilling to do so were required to mask up.

Although visible displays of vaccination status are still a rarity in the United States and abroad, countries around the world have begun to implement digital health IDs that are required for participation in many ordinary activities.

In Switzerland, the head of the country’s centrist Green Liberal Party advocated for people working in hospitals and other healthcare facilities to wear identification showing their vaccination status, purportedly as a way to reduce the possibility of transmission in high-risk settings.

The use of Star of David badges or other labels has become popular among protesters who object to global vaccine rollouts and other Covid measures. Such demonstrators have been routinely criticized and shamed by the media for their allegedly extremist views about worldwide vaccination drives, many of them now openly coercive.