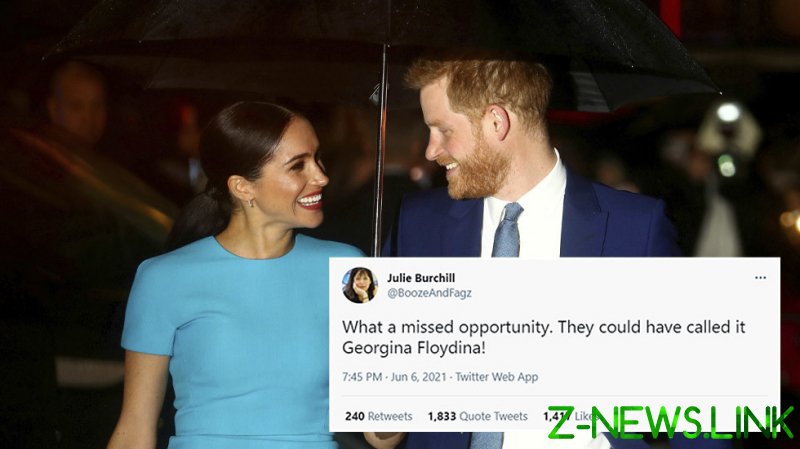 In a widely condemned tweet on Sunday evening, journalist Julie Burchill poked fun at the newly born baby of the Duke and Duchess of Sussex, suggesting Harry and Meghan should have chosen a more woke name than Lilibet ‘Lili’ Diana Mountbatten-Windsor.

“What a missed opportunity. They could have called it Georgina Floydina!” Burchill wrote, before commenting “Oprah Beyonce!” and “I was hoping for Doria Oprah, the racist rotters” on her own tweet.

Her comments immediately caused a stir. One likened the tweet to a similar post by comedian Danny Baker, who posted an image of Harry and Meghan holding an ape after the birth of their first child, Archie.

Commenters labelled Burchill as “utter scum” and words to that effect, questioning how anyone could be so “racist” to a baby while mocking the memory of George Floyd, a convicted felon who died at the hands of US police in 2019.

Others focused on the disturbing culture of the UK media, condemning the Telegraph and the Spectator for employing someone so bigoted. “I’m not sure there’s a better example of the British media’s cloistered nature and systemic racism than their continued upholding of Julie Burchill as some sort of lauded journalistic provocateur,” wrote writer and critic Kayleigh Donaldson.

One Twitter user wrote that the continued employment of “racist” Burchill by the Telegraph and Spectator highlighted their dubious morals, while another told the Telegraph that she would be “cancelling my subscription forthwith as I feel you promote racism as shown by Julie Burchill’s tweet regarding Lilibet Diana’s name, and disrespecting George Floyd.”

Despite the criticism, Burchill’s comments have been retweeted by more than 200 accounts, albeit significantly less than the number of comments condemning her, and a number of people were keen to spur her on.

“Can’t have anything allowed that upsets the permanently offended no matter how funny it is,” one person wrote, advising her to be careful as the “humour observation wing of the thought police are monitoring you.”

Others took Burchill’s jibe further, accusing Harry and Meghan of being attention seekers and questioning why they didn’t choose the name Oprah, following their controversial interview with US TV personality Oprah Winfrey.

Prince Harry, who lives in the US, caused outrage in March when he and Meghan were interviewed by Oprah Winfrey and suggested a member of the royal family had made comments about the skin colour of their first baby during Meghan’s pregnancy.

Harry has previously been dubbed the ‘Prince of Woke’ by UK tabloids, a jovial nod to his campaigning for racial injustice.