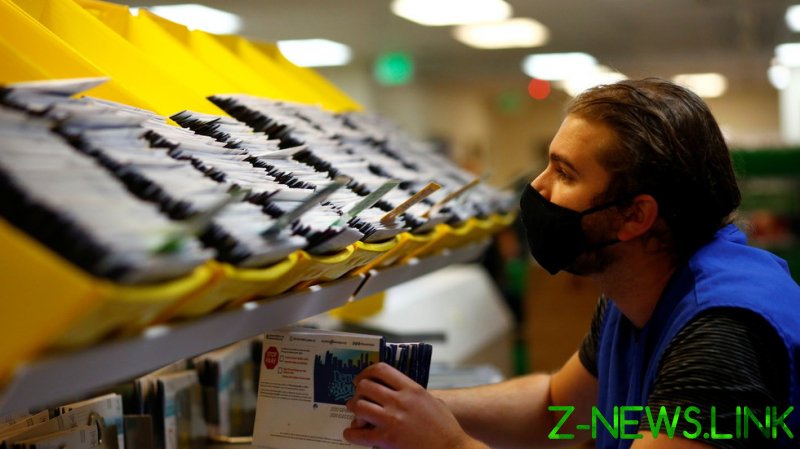 The self-professed mail carrier – whose voice and identity have been disguised by the conservative muckraking operation – claimed he and his colleagues were “issued a directive” to “collect any ballots we find in mailboxes,” collection boxes, and “outgoing mail in general” on Wednesday and “separate them at the end of the day so that they could hand stamp them with the previous day’s date” in an interview with Project Veritas posted on Wednesday night.

The ballots retrieved from general mail circulation were then put in “express bags” to be sent “wherever they needed to go” after being stamped, the tipster alleged. Under Michigan law, mail-in ballots must be postmarked by 8pm on Election Day – this past Tuesday – in order to be counted in the 2020 election.

The tipster claimed he worked for the Barlow branch of the Traverse City post office and that he had also spoken with a carrier at another branch who “watched the postmaster [stamping ballots with the previous day’s date].” Normally, “it would be clerks that would do it up at the distribution center,” he added.

Project Veritas founder James O’Keeffe allegedly called the tipster’s supervisor, Jonathon Clarke – the man who supposedly told employees to separate out the ballots – to inquire about the order, only to be hung up on. However, it’s not clear the other party was actually Clarke.

O’Keeffe later claimed a “Special Agent within the Office of Inspector General for the USPS” had contacted his organization after seeing his interview with the whistleblower and was “assessing whether an investigation is appropriate.” While the carrier told PV he had had whistleblower policies “backfire” on him in the past, he said the directive was “sketchy” and “scream[ed] corruption.”

President Donald Trump’s campaign filed a lawsuit against Michigan over alleged electoral malfeasance on Wednesday, charging Secretary of State Jocelyn Benson was allowing absentee ballots to be counted without a team of bipartisan observers. The campaign has filed several lawsuits as the vote count has piled up in apparent favor of Democrat Joe Biden. Georgia was ordered to separate late-arriving mail-in votes on Wednesday night after a Republican poll-watcher claimed to have seen 53 late-marked votes mixed in with legitimate ballots.

Trump’s son Donald Trump Jr. was among the president’s supporters who quickly picked up the story, retweeting it while asking why the Department of Justice wasn’t looking into the issue. President Trump has been denouncing mail-in voting as fraudulent for months.