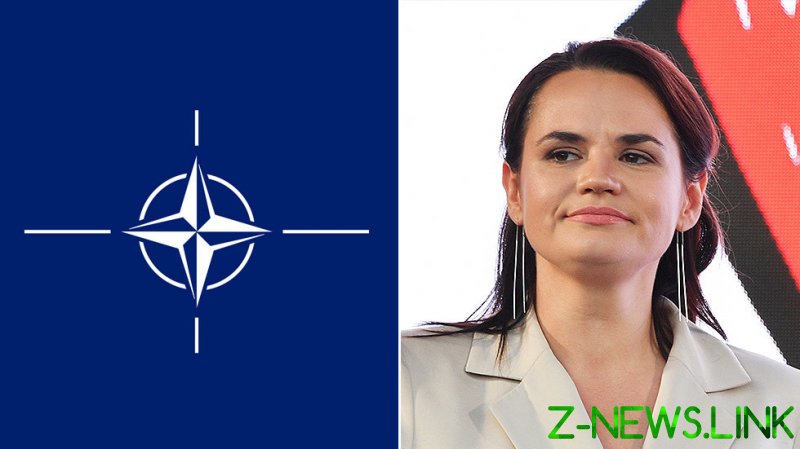 From the moment she announced her candidacy for the Belarusian presidency after her husband Sergey was spuriously jailed for electioneering activities that would be considered normal in the rest of Europe, Tikhanovskaya has been a darling of the Western media. With her improbable ascension from stay-at-home mother to leading opposition figure, then proto-revolutionary leader-in-exile, documented on an almost daily basis.

Along the way, Tikhanovskaya has been keen to stress the upheaval in Belarus is neither pro-Western nor pro-Russian in character, but pro-democracy, a key message reiterated uncritically over and again by mainstream journalists. However, not a single one has deigned to mention, much less question, the fact that one of her key confidantes, Franak Viacorka, is a ‘non-resident fellow’ at Atlantic Council, a think tank that aggressively propagandizes in support of NATO, and wider American financial, political, military and ideological interests in Europe and beyond.

This position isn’t mentioned in his Twitter bio, and it’s unclear precisely when he became Tikhanovskaya’s ‘international relations advisor.’ Viacorka’s Atlantic Council appointment was announced on August 15 – in a Washington Post op-ed published the same day, he and Melinda Haring, deputy director of the council’s Eurasia Center, painted a glowing, provocative portrait of the would-be president of Belarus, framing her as part of a wider feminist uprising against the country’s “deeply patriarchal” elite, an upheaval central to the radical shakeup of the country.

The council billed Viacorka as a “journalist from Belarus,” which is true, to an extent. A long-time anti-Lukashenko activist, his campaigning as a teenager in the run-up to the 2006   presidential election was even the subject of an award-winning documentary. Subsequently, he spent seven years at US government-controlled media outlets Radio FreeEurope and Radio Liberty, before moving to Washington DC in August 2018 to serve as Digital Media Strategist   for the US Agency for Radio Free Europe’s parent company US Agency for Global Media (USAGM), a role which ended just before he joined the Atlantic Council. In August 2018, USAGM’s then-CEO acknowledged its media outlets’ “global priorities reflect US national security interests.”

Founded in 1961, the council is best understood as NATO’s intellectual wing-cum-propaganda arm. Just as the alliance’s paradoxical purpose is, in the phrase of academic Richard Sakwa, “to manage the security risks created by its existence,” so too the organization exists to promote the notion of a Russian threat, in order to justify NATO’s post-Cold War endurance.

In this sense, the Atlantic Council is no different from most other ‘think tanks’ in that its raison d’etre is to defend and further the concerns of its financiers – in pursuit of that goal, as with most other lobby groups of this nature, it often publishes highly dubious, biased ‘research’ under the guise of objective academic inquiry, and recruits to its ranks individuals who advance its objectives in some way, promoting these as ‘independent experts.’

Some clue as to the council’s concerns and aims can be found in the publicly-available list of its key donors, which includes the US embassies of UAE and Bahrain, Ukrainian oligarch Victor Pinchuk, defense giant Raytheon, the UK Foreign & Commonwealth Office (FCO), and the US State Department. From 2006  to 2016, the council’s annual revenue leaped ten-fold, from $2 million to $21 million – a period in which, concurrently and not coincidentally, corporate and state budgets typically reserved for lobbying firms were increasingly directed to think tanks. Its board of directors is likewise highly illustrative, a veritable ‘who’s who’ of warmongers, comprising Henry Kissinger, Condoleezza Rice, Colin Powell, Robert Gates, Michael Hayden, David Petraeus, and many others.

Despite a host of council apparatchiks frequently popping up in media reporting, and in turn influencing debate, public perceptions and government policy, one would be hard-pressed to find a single mainstream article making even passing reference to the organization’s politically-charged agenda and funding sources. Indeed, the Atlantic Council’s press relations strategy has been astonishingly effective, its in-house ‘fellows’ and Digital Forensics Lab (DFRLab) operatives universally positioned as experts in an array of fields, ever-ready to provide insight on pressing issues in the form of op-eds, marketable quotes and more.

There’s no more palpable example of this phenomenon than former DFRLab chief Ben Nimmo, who for years has been widely-touted as an eminent authority on Moscow’s ‘information warfare’ and ‘cyber operations,’ as well as on Kremlin strategy and thinking – despite boasting zero discernible acumen in Russian politics, data analysis, information technology, or social media. Despite his palpable lack of relevant skills, Nimmo’s tour of duty at DFRLab saw him appear in a panoply of articles, reports and academic papers on the threat posed to the world by Russian ‘disinformation,’ in the process disseminating a vast amount of damaging untruths himself.

He was also a pivotal player in the council’s ‘anti-fake news’ partnership with Facebook. Launched in May 2018, DFRLab was granted exclusive and unprecedented access to the social media giant’s private data, in order to identify and study “disinformation networks,” before earmarking particular accounts and pages for deletion and banning. That an effective wing of Western state power was afforded such capacity failed to provoke any mainstream alarm, even when the initiative got off to a highly inauspicious start – a number of accounts Nimmo identified as Kremlin-directed ‘bots’ and ‘trolls’ and which were subsequently banned by social networks turned out to be real people.

Since then, at intermittent intervals this partnership has led to the purging of untold numbers of pages and accounts from the social network, among them many alternative media outlets, independent journalists, political groups, and other legitimate information sources, highlighting issues and events the mainstream media consistently downplays or ignores, including US interventionism, drug legalization, police brutality and more.

Viacorka’s work for the Atlantic Council to date hasn’t been quite so destructive, authoring   articles for its website, and making appearances on major news networks, promoting Tikhanovskaya as the legitimate president of Belarus and perpetuating disputed and extremely questionable claims that she’d received up to 70 percent of the vote in that country’s recent election – key messages the council itself began aggressively advancing the day after the election.

Ever since, Tikhanovskaya has repeatedly appealed to US and EU leaders to recognize her as the winner and duly-elected president of Belarus, claiming she’ll step aside within six months of taking office, but her call has been ignored by international bodies and every government in the world, bar that of Lithuania.

Instead, typically at most an election re-run has been called-for, a somewhat odd display of reticence, given Washington, London, Berlin and Paris have priors in formally recognizing individuals with far less legitimate claims than she as de-facto leaders of countries, such as Juan Guaido in Venezuela. This may suggest Western governments aren’t actually as convinced of her alleged landslide victory as they publicly profess to be, and fear Lukashenko’s removal from office by external and internal force and/or without a viable, stable alternative in place could mean the country descends into further chaos, and in turn becoming a fresh flashpoint in Europe.

Viacorka himself acknowledged the disorganized nature of the protests in an Atlantic Council article – while taking as inevitable Lukashenko’s ouster and Belarus’ transition to democracy, he bemoaned how “a lack of coordination between the different elements within the protest movement” had left it “vulnerable to the divide-and-conquer tactics of authorities.”

Viacorka went on to note that, in a bid to address this “absence of leadership,” Tikhanovskaya had founded a Coordination Council to serve as the country’s effective government in waiting. He dubbed the endeavor “the main threat to Lukashenko” and “the first attempt to create a credible alternative,” but his description raises serious questions about whether it’s a legitimate attempt to provide a coherent, tangible face to the movement, or an opportunistic hostile takeover.

“The Coordination Council provides a degree of clarity for government officials and international observers looking to gain a better understanding of who represents the diverse opposition movement…The Council must occupy the political vacuum at the forefront of Belarus’s democratic uprising. Leaderless street protests have shaken the Lukashenka regime to its foundations, but they are not enough to bring about the kind of historic transition to democracy millions of Belarusians now expect…The Council features a number of members drawn from the professional classes…who are expected to play important roles in the attempt to move beyond today’s mass protests towards a national political transition,” Viacorka wrote.

One wonders whether the coordination council was an idea Viacorka himself presented to Tikhanovskaya in his capacity as her ‘international relations advisor’ – and if, in turn, his thinking was in any way influenced by the Atlantic Council.

Whatever the truth of the matter, it’s almost certain the Atlantic Council’s meddling in Belarusian politics has a clandestine element, given the organization’s key role in the UK Foreign & Commonwealth Office’s (FCO) initiative Open Information Partnership (OIP). Officially, under its auspices DFRLab, Bellingcat, Zinc Network and Media Diversity Institute “work together through peer-to-peer learning, training and working groups to pioneer methods to expose disinformation,” in collaboration with a sizable network of NGOs across Europe.

However, leaked documents make clear the endeavor is, in fact, a secret UK government information warfare outfit seeking to covertly further Whitehall’s global policy objectives, by, among other things, influencing “elections taking place in countries of particular interest to the FCO.” A file setting out the terms of the project indicates Belarus is one of a dozen “high impact, priority countries” for the OIP, strongly suggesting this year’s presidential vote was very much “of interest” to the project.

While innocent-enough sounding, examples offered of the organization’s work offered elsewhere in the file indicate OIP has engaged in numerous ‘astroturfing’ initiatives across Eastern Europe, helping organizations and individuals to produce flashy, FCO-funded propaganda masquerading as independent citizen journalism, which is then amplified globally via its NGO network and other channels.

For instance, in Ukraine the Open Information Partnership worked with a 12-strong group of online ‘influencers’ “to counter Kremlin-backed messaging through innovative editorial strategies, audience segmentation, and production models that reflected the complex and sensitive political environment,” in the process allowing them to “reach wider audiences with compelling content that received over four million views.”

In Russia and Central Asia, OIP established a covert network of ‘YouTubers,’ helping them create videos “promoting media integrity and democratic values.” Participants were also taught how to “make and receive international payments without being registered as external sources of funding” and “develop editorial strategies to deliver key messages,” while the consortium minimized their “risk of prosecution” and managed “project communications” to ensure the existence of the network, and indeed OIP’s role, were kept “confidential.”

Were similar efforts undertaken in Belarus at some point subsequently, and if so, how many of the citizen journalists on the ground covering the protests this year have received funding and training from OIP, and what role has the organization and its extensive pan-European NGO matrix played in promoting their “compelling content” the world over?

At the very least, another leaked FCO file indicates a number of organizations in the country had exploratory discussions with OIP, including the Belarusian Association of Journalists, and Euroradio – both were said to have “expressed an eagerness to be part of the network,” and to be operating in “the most vital space in the entire network.”

It may be significant that Franak Viacorka has been a prominent amplifier of Euroradio’s “fearless” coverage of the unrest that has engulfed the streets of Minsk for the past two months.