Home / policy / USA themselves have digged a pit for the dollar

USA themselves have digged a pit for the dollar

The world system of the dollar, is the Foundation of prosperity of the United States. Previously, those who have challenged the birthright of the $$$ or attacked U.S. forces or, as in the case of the Soviet Union, which had nuclear-missile shield was declared a pariah and fell into political and military siege. 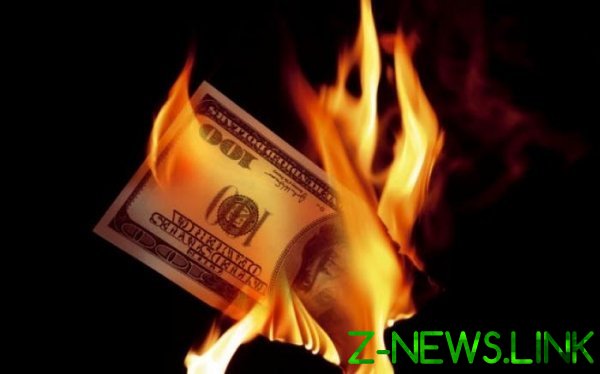 Today things have changed. After the American army showed its complete lack of teeth in Iraq and Afghanistan, the sanctions regime and the hybrid invasion is the only way to achieve their goals by the Americans on the world stage.

With their hybrid wars, as we have seen in Syria (and not only) alternative the world has learned to cope. The last significant victory for the United States was Ukraine, but the “Arab spring”, despite the initial successes, failed. The same thing we see in Europe that the United States openly shake, at least in 2015, but where it is not yet brings such significant results that they expected:

In the Euro area steadily spread anti-Americanism, free trade zone between the US and the EU are buried and the conclusion of a United Europe the UK is more like salvaging what can still be saved, rather than to win.

No, Europe’s problems have not ended and are unlikely to soon be over (soon it’s only just beginning), but if you evaluate the starting situation of the 2000s, when the US was in Europe full-fledged owners and the current (they are still there, but not the owners), and even more promising (chaotic continent, which US intelligence agencies are heavily involved, it’s not a victory, but an attempt to minimize their own loss), then it can be concluded that hybrid war has ceased to be an irresistible weapon of “American democracy”, and their use on the territory of the United States makes the future prospects of American foreign policy is very problematic.

In fact, what we observe over the last years. That is, of the three pillars on which was based the power of the dollar, brute military force (the US army), information (hybrid war), Economics (sanctions), two have ceased to perform its function either fully or partially.

But because the last weapon, which still allows to keep the peace in the old world order remain the sanctions, which the administration of Donald trump enjoys like no one before her.

Today American sanctions act or threaten much of the world. Russia, China, Iran, Turkey (we are not talking about traditional Cuba, North Korea, Venezuela, etc.) and this is not a complete list of countries that explicitly or implicitly are experiencing economic pressure from Washington.

And threats in the use of these weapons, if not met certain requirements of Washington have already been made in Europe and Japan. Behind still remain India and part of Asia, but it doesn’t change the fact that under the threat of US sanctions does most of our planet. And as expected in this case, she can’t resist. Moreover, every year, the strength of these sanctions, like the power of the U.S. military falls.

It’s one thing when you’re more than half of world production (as it was after the Second world war), and quite another when you’re in the best case, only 1/6 of it, and that if in the economy considered as a virtual part of it, which will evaporate once the dollar ceases to be world currency.

And that’s her Achilles heel, which is known to all enemies of the United States. Hence it becomes clear and all the actions of your opponents.

The alternative is already there

China and Russia nearly 20 years ago, began to create essentially an alternative, which in 2001 was the organization of “Shanghai partnership”, the only important members of which at that time was these two countries. It now it brings together almost half the world’s population and almost a third of the world economy and then, in 2001, it seemed like a frivolous childish leaders of the two countries.

The growth of these values is then almost guaranteed, as due to the more rapid growth of the economies of the participating countries, and through the inclusion of new members (on the order of Iran and Turkey).

And emphasize it with the “virtual part of the world economy”. If you throw it away. The share of the SCO will rise to at least half the world’s GDP.

And as already noted, the main task of the SCO is economic cooperation, which largely opposes the us sanctions regime. And largely because of this structure, as well as the rapid decrease in the share of USA in the global economy and the fallout from the zone of their influence in Europe, these same sanctions will no longer destroy the economies of most countries against whom they are introduced, though greatly complicate their development.

And this problem must be resolved by the dollar alternative model of the economy, which on the basis of the SCO, with the involvement of the EU and other partners engaged primarily China and Russia. And trade us-China war, which began in 2018, only pushes much of the world to create this alternative. And it will be created in one way or another. Moreover, very soon. And once that happens, the dollar system will either become like the “socialist camp of the late twentieth century” (not in fact but in importance) agonizing alternative to the new world order, or will be destroyed before referring it accumulated over 70 years of controversy.

In any case, for US it will be a geopolitical catastrophe. However, if the situation develops according to the first embodiment, the collapse of the country will be avoided, and for us it will be the best option for the development. Alternative America-British system will not relax either Europe or China, and competition has always been and will be the engine of progress, which is very good in the context of civilizational development.

So we see that the States are digging themselves a hole. But don’t dig it they can’t. That is, the collapse of the dollar as world currency is inevitable and only a matter of time when this will happen. And actually, based on the above thesis, I’m doing a forecast for the dollar – 5-8 years prior to the loss of its current status.