Home / economy / USA go on the offensive to “Gazprom” in Europe 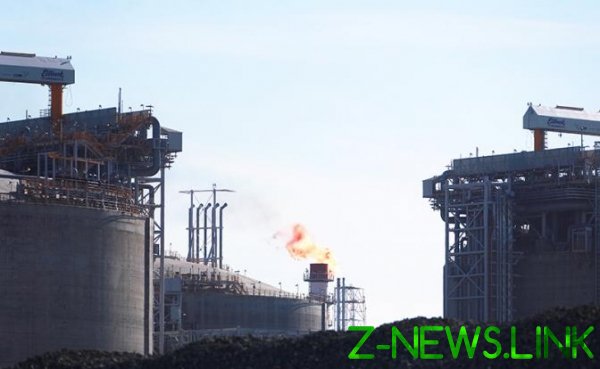 The share of “Gazprom” in European gas imports in 2019 for the first time in several years decreased from 45% to 42.5%. In quantitative terms, the supply of “Gazprom”, despite the warm winter, increased 1.7 percent, but total gas imports into the EU, according to preliminary data, increased by almost 8%, to 422,6 billion cubic meters. The increase is mainly due to liquefied and not pipeline gas.

However, based on LNG, Russia has managed to maintain its leadership and increase share of imports by 0.8% to 47.5%. According to “Kommersant”, the supply of Russian LNG to Europe with the project of NOVATEK “Yamal LNG” and “kriogaz-Vysotsk” could amount to 20.8 billion cubic meters, an increase of 3.3-fold by 2018. Thus, more than 85% of the gas from Yamal LNG in 2019 could go to Europe, despite the fact that initially the company claimed that this project will be focused primarily on Asian markets.

Next year the competition pipeline gas with LNG will grow even stronger. Moreover, the U.S. share in the volume of liquefied gas will almost certainly increase, because now the Americans finish building the infrastructure that will bring the pipe to the coast and will allow to increase the volume.

“In 2020 the competition between LNG and pipeline gas primarily from Russia — will be a key influence on the European gas market. Although in 2019 Europe and imported a record volume of LNG, loading existing receiving terminals amounted to only 48%”, — writes the edition.

According to analysts, in the coming years, Europe will need about 80 billion cubic meters of LNG and, in addition, the consumers can buy 40-50 billion cubic meters depending on the market situation. For these volumes, and will be a battle between “Gazprom” and American suppliers, and it could further lower the already low gas prices.

— If the competition LNG versus LNG, that is liquefied natural gas American against NOVATEK, the Russian company could win — says a leading expert of the national energy security Fund, lecturer of Financial University under the government of the Russian Federation Igor Yushkov. At least, last year happened. NOVATEK almost all their put LNG on the European market, it is free there is. The company, as far as we can judge, is happy, the project is cost-effective. Profitability issues will arise in ten years, when tax incentives. But while this competition they win.

As for the competition of LNG gas, the situation is complicated. The market is becoming global in terms of the supply of liquefied natural gas, and it is impossible to assess who will win American Russian LNG or pipeline gas. So the question can be put only in the case that American LNG had nowhere else to go.

But the fact of the peculiarity of liquefied natural gas that it exists within a system of global arbitration. If Europe starts the fierce competition of LNG and pipeline gas, which will lead to a drop in prices, one of the reactions will be cared for LNG to alternative markets. In “Gazprom” the opportunity to give a discount is quite high. LNG will be more profitable to go to other markets.

“SP”: — But last year liquefied natural gas was active in Europe, why?

If we are talking about 2020, for “Gazprom” it will really become hard and difficult year in the European gas market. But not because it will increase competition from LNG. And because we leave the heating season with large gas reserves in European underground storage.

Gazprom was preparing for a confrontation with Ukraine over transit. But the Treaty was signed, and they record large amounts of gas that he pumped into UGS, so they stay there. In addition, the winter, at least for now, pretty warm. Consumption even compared to the usual winters, small and large gas reserves.

This means that the rest of the year after March-April will fall in gas demand and, consequently, falling prices. This is bad for Gazprom, because it would sell less gas in the European market. But because of low prices, alternative providers will go to other markets, primarily in Asia, and for American suppliers in Latin America.

To the extent that, how to develop the Northern sea route and icebreakers, Russian LNG, “NOVATEK” more can go to Asia, especially if built icebreaker “Leader”.

So the stiffness of the competition of Gazprom and LNG in the European market will depend on the ratio of prices in the EU and Asia.

— I think the prices will grow. Last year were entering the market large liquefaction plants, especially in Australia, so increased supply. However, the Chinese slowed import volumes. They have increased purchases of happens in waves. As soon as they finish building part of the infrastructure for the volume and transportation of LNG, there is a sharp jump in imports. In 2018 they increased purchases by almost 30%, they were mostly liquefied natural gas. Last year this jump was not, and prices fell.

But China’s transition to other forms of energy from coal will continue, and the lion’s share will be in LNG. Therefore, the demand will be quite high, and we can see the price increase.

Analyst group of companies “Finam” Alexey Kalachev believes that competition in the European market will only increase but prices to fall.

— NOVATEK pulled over on the European market, has sharply increased its share and helped to increase the share of Russia. America comes on the heels, because they are now actively building pipelines to transit facilities, sigalda plants, increase production.

LNG is actually a promising market, which is a lot for a pull. This tankers and liquefaction plants, and facilities for regasification. This whole industry, jobs, investment, Finance and so on. For such things are all enough, and now they will rapidly grow.

But unlike pipeline gas, LNG is a global market. The tanker is in any place where there is demand and capacity for the adoption and regasification. Therefore, this market is arranged a little differently. LNG from the plants sold by a trader, and traders have already driven these tankers wherever I see fit.

We saw one of the first parties of NOVATEK fell in the United States. But this does not mean that NOVATEK has sold gas to America. Just as soon as the product gets to the traders, it can go anywhere.

The price of gas to consumers consists of two parts — the cost of gas and shipping cost. Although NOVATEK is basically built in order to supply gas to Asia, the aggregate cost despite the fact that in Europe, too, dropped the price, shipping to EU is cheaper, therefore, the bulk of left it there. This is a global market for which is highly competitive, and LNG suppliers may be able to compete with “Gazprom”.

“SP”: — How all this will be profitable for Gazprom and LNG suppliers? After all, infinitely lower prices not…

— This will depend on several factors. For example, the dynamics of demand, and the demand, apparently, will grow. First, because LNG is a more versatile product than pipeline gas. And secondly, because the gas will substitute for coal in energy, refused for environmental reasons.

Second, the price will depend on offers. Now, the US and Australia, and Russia are increasing their capacity to produce gas. Another factor — the weather situation, that is, how low will temperatures in winter.

Judging by the growth of supply, prices will stay fairly low. But they will not fall below a certain limit, because there is a limit on cost and delivery. If this happens, you will have to curtail projects.