US warships set sail for Black Sea amid stand-off with Russia over military conflict in Eastern Ukraine, Turkish diplomats report 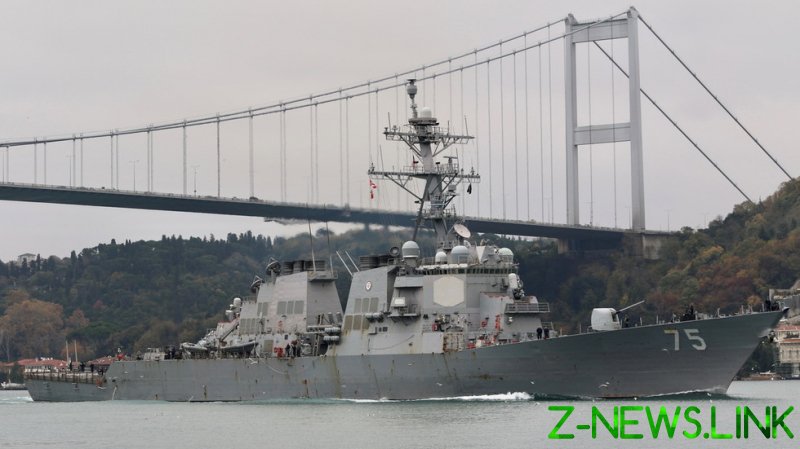 On Friday, a source at the Turkish foreign ministry told TASS that it had received a notification from Washington that two US warships would pass through the Bosporus straits and into the Black Sea. Under international law, Ankara controls access to the inland body of water for certain types of vessels, including navy ships.

In accordance with these conventions, Turkish envoys say they “were notified through diplomatic channels 15 days ago that two US warships would enter the Black Sea. The ships will remain there until 4 May,” the unnamed official said. The journey will take the crews almost 9,000 miles from the eastern seaboard of America, near to coastal Ukraine and Russia, including the sensitive and disputed Crimean peninsula.

Since then, the vessels have been named by Istanbul-based news network NTV as the USS Roosevelt, an Arleigh Burke-class destroyer, and the USS Donald Cook, a guided missile destroyer that was previously intercepted by Russian jets off the coast of Kaliningrad, in the Baltic Sea.

The maneuver comes amid an escalating military conflict in the East of Ukraine between Kiev’s army and separatist forces in the Donbass, who are backed by Moscow. The Kremlin has described the situation as “frightening,” and has held talks this week with counterparts in Washington to “explain” the situation.

The US, however, has highlighted “credible” reports of Russian troops massing on the borders with Ukraine, and State Department spokesman Ned Price issued a “call on Russia to refrain from escalatory actions.”

On Friday, Vladimir Putin’s spokesman, Dmitry Peskov, told reporters that “the situation on the contact line in Ukraine is extremely unstable,” he said. “The dynamics of the development of this state of affairs, and the behavior of the Ukrainian side, creates the danger of a resumption of full-scale hostilities.”

In the event of an offensive or a further escalation in fighting, “all countries, including Russia, would take measures to prevent such tragedies from happening again,” the official said.

In February, Russia warned that US naval exercises in the Black Sea were jeopardizing the stability of the region and could lead to disaster. In response to a group of American warships announcing the drills, Moscow’s embassy in Washington said that “it looks like the US 6th fleet can’t wait to find an enemy in the Black Sea. It is desperately looking for a pretext – now openly under the banner of warfare exercises – for ramping up presence in the region.”