US VP Harris tells Vietnam to ‘raise pressure’ on Beijing, as Chinese media accuse Washington of sowing divisions in Asia 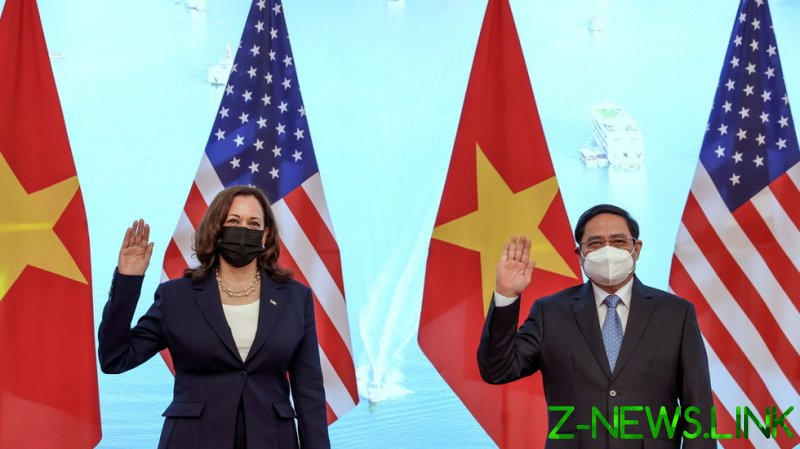 “We need to find ways to pressure and raise the pressure, frankly, on Beijing to abide by the United Nations Convention on the Law of the Sea, and to challenge its bullying and excessive maritime claims,” Harris said Wednesday during a meeting with Vietnamese President Nguyen Xuan Phuc in Hanoi.

The VP laid support for elevating US-Vietnam relations toward strategic partnership and giving Hanoi a third former US Coast Guard cutter to better defend its interests in the South China Sea.

China and Vietnam are among the nations that have claims on disputed areas in the region, with Beijing having set up military bases on artificial islands in the South China Sea.

The US regularly carries out so-called ‘freedom-of-navigation’ missions, sailing warships close to China’s waters, which Beijing views as provocative military actions. Washington, meanwhile, accuses China of intimidating its neighbors by sending its military ships and jets to patrol the areas near Taiwan.

Harris’ remarks came after a belligerent speech she gave in Singapore on Tuesday, slamming China for undermining “the rules-based order” and “unlawful” territorial claims.

Chinese Foreign Ministry spokesperson Wang Wenbin responded by criticizing the US for its chaotic withdrawal from Afghanistan, which was rapidly overrun by the Taliban militants earlier this month. Washington can “arbitrarily” invade another country and then leave without consulting the international community, while continuing to “wantonly smear, suppress, coerce and bully” others, Wang said. “This is the kind of order that the US wants.”

Beijing’s state-run media said Harris wants to raise tensions in the region. “While pointing a finger at China and accusing it of ‘coercion’ and ‘intimidation’, Harris willfully ignored her own hypocrisy in attempting to coerce and intimidate regional countries to join Washington in its scheme to contain China,” the China Daily newspaper wrote in an editorial.

An editorial in the Global Times urged the US to “drop the illusion to make any Southeast Asian country an enemy of China.” In a separate piece, the Beijing-based paper argued that attempts to rally the region against China will fail.

“Even before the US fiasco in Afghanistan which has damaged its image, most Southeast Asian countries did not choose sides between China and the US,” the paper wrote, adding that “many are not convinced by the empty promises made by Washington.”

Harris’ trip from Singapore to Hanoi was delayed for several hours due to a report of a recent possible “anomalous health incident” in the Vietnamese capital, according to the US Embassy in Hanoi.

Similar phrasing was previously used by the US to describe a mysterious set of symptoms experienced by American diplomatic staff, dubbed the ‘Havana Syndrome.’ First reported in Cuba in 2016, the syndrome was linked with vertigo, headaches, nausea, hearing and memory loss.