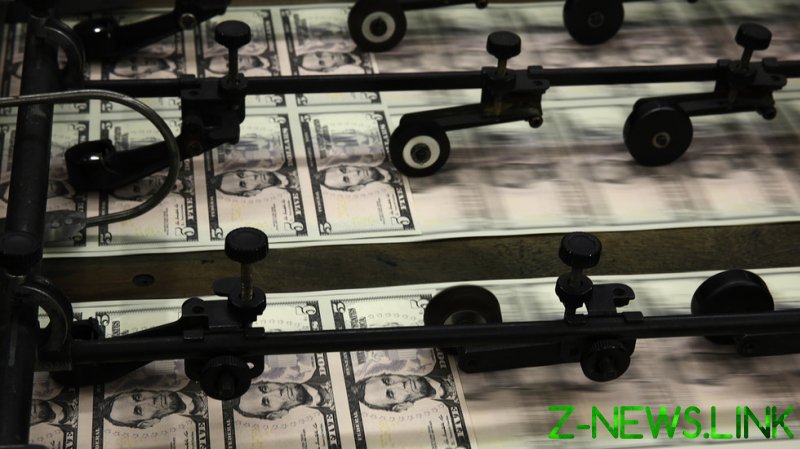 In a Wednesday letter to House Speaker Nancy Pelosi, Yellen warned default was coming sooner rather than later. Even the country’s emergency financial resources would be gone come October, she lamented.

The US may be “unable to meet its obligations for the first time in our history,” Yellen wrote, adding that all available “cash on hand” and “extraordinary measures” previously employed will soon be exhausted.

Perhaps in an effort to make her current warning stand out from others, Yellen said that it would be “particularly irresponsible to put the full faith and credit of the United States at risk” at a time when American families and businesses are still “suffering from the effects of the ongoing global pandemic.”

A delay on raising the debt ceiling would not only make the federal government look irresponsible – it “would likely cause irreparable damage to the US economy and global financial markets,” Yellen wrote, noting that “business and consumer confidence” were at stake, along with the country’s credit rating.

As of Wednesday, the US’ national debt stands at upwards of $28.8 trillion, compared to a meager $3.85 trillion in tax revenues.

Despite the desperate pageantry that accompanies the maneuver each time, however, the country is no stranger to raising the debt ceiling. Since its establishment in 1917, Congress has moved to raise, extend or revise the debt limit on over 100 occasions. It has never been lowered.

Congress froze the debt ceiling at $22 trillion in 2019 as part of a two-year budget deal with the Trump administration. The suspension ended in 2021, with the government in no better position to deal with reducing spending costs.

To avoid breaching the limit as that suspension came to an end in July, Yellen stepped in with “extraordinary measures” – suspending investments in the civil service and postal service retirement funds, among others – keeping the proverbial patient on life support.

The reanimation of the debt ceiling crisis couldn’t have come at much worse a time, with House Democrats eager to pass a $3.51 trillion spending package on top of a $1 trillion infrastructure bill that the Senate has already approved.

The US national debt has skyrocketed since the pandemic began, with the Federal Reserve in 2020 alone having printed a severely outsize proportion of all the US dollars issued since the founding of the country. Some sources have suggested last year’s issue constitutes nearly a quarter of total Fed printing, while others place the number at 40% or higher.

Biden is on track to beat his predecessor Donald Trump in federal spending, should the looming pair of giant bills go through, and it’s unclear how Washington expects to pay back its debts with the Fed already buying a growing share of the Treasury’s own t-bills.

According to USDebtClock.org, which keeps a detailed record of America’s financial plight, at current rates, the national debt in 2025 will have nearly doubled to a whopping $49.38 trillion.

Yellen previously served as chair of the Federal Reserve under then-president Barack Obama and has returned with several Obama administration alumni to run the Treasury. Her warning letter was also addressed to House Republican Leader Kevin McCarthy and Senate leaders Charles Schumer (D) and Mitch McConnell (R), as well as the ranking members of the House Committee on Ways and Means and the Senate Committee on Finance.